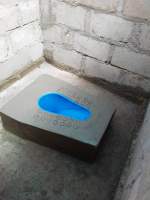 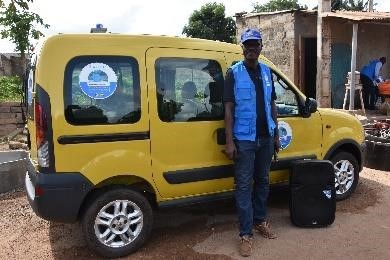 Cap on head and wearing a bright blue WC Mimin vest, Ismaël Amouh is proud to stand in front of his new work tool. A beautiful mustard-colored van, which he acquired thanks to the profits generated by the sale of sanitation products, WC Mimin latrines.
As trained sanitary plumber, Ismaël Amouh, 64, is a father of three children. Before finding Minin, he alternated between digging pits and plumbing jobs to pay his daily expenses. His monthly income was around 150,000 CFA francs.

During an awareness campaign of the SSD team in Apro-Missérété municipality in Benin, Ismaël discovered WC Mimin latrines. Mimin (meaninin 'clean' in the local language in Benin) are toilets that manually flush with two alternating offset pits and a seated user interface that includes a SATO pan. This improved latrine eliminates odors, andkeeps away flies and other insects that spread disease. Its target market is low-income households living in urban and peri-urban areas in Benin.
After Ismaël received training by the project team, SSD immediately started producing Mimin latrines and offering a new product to his customers. "When they understood that with Mimin brand products (defecation jar and Mimin toilet), there is no smell and insects, customers started to grow in numbers," said Ismaël.

Having only started with five workers, Ismaël has now grown his business to hire 20 workers to meet the high demands of his customers. He produces an average of 70 sitting latrines (defecation pots) per week. Today, his activities generate a monthly income of 350,000 CFA francs, "Thanks to WC MIMIN, I was able to buy a vehicle that is also a communication channel for me, because I have put up WC MIMIN posters and everywhere I go people come to get information from me" said Ismaël.
To date, Ismaël Amouh has 25 stores where he exhibits his products. Equipped with a loudspeaker and a microphone, he organizes promotional activities to offer his products directly to households.

Minmin is a brand of sanitation products and services that corresponds to a quality label at affordable prices. This brand was created as part of the Sanitation Services Delivery (SSD) project activities. Funded by USAID, and implemented by Population Services International, this project aims to catalyze the private sector to provide quality and affordable sanitation products and services to low-income households living in the urban areas of Benin and Côte d'Ivoire.
Olivier KONAN
Learning and Communication Manager SSD|PSI Côte d’Ivoire

USAIDssd wrote: Do you know how a SatoPan works? 🤔🤔🤔Ah ahhhhhhh ! Do you also know how a double-well latrine works? 🏃♂️🏃♂️🏃♂♂️🏃♂ Don't panic 😂😂😂 This is the opportunity to discover it in this 2min video #Sanitation #USAIDFundedProjet #SSD

Re: Sucess Story : Sani Plus: a new field of possibility for Tibus Kouassi

Engineer in Building and Public Works techniques, Tibus Kouadio is the Managing Director of a construction service company. With a staff of 25 employees, he designs architectural plans, carries out technical feasibility studies and supervises construction sites.
Indeed, business was going well enough for him. One of the projects he carried out provided him with nearly 20 million in profits. Suddenly, everything stopped. Markets have become increasingly rare.

A set of difficulties that led him to the crisis forcing him to lay off to keep only 5 positions. Unable to bear the maintenance costs, Tibus is also forced to resell the 4 public transport vehicles he owned.
As part of market development activities, the USAID-funded Sanitation Service Delivery Project (SSD) is working with city councils to establish a supply chain. The objective of the project is to train and engage the private sector to provide sanitation services to low-income households through commercial provision. "Sani Plus" is a brand of quality and low-cost sanitation products created by the project.
Going to Abobo City Hall for an administrative formality, Tibus discovers on a bulletin board, the call for proposals of the SSD project to recruit VSEs interested in sanitation marketing. "I thought to myself why not try," he said.

A few months after his training on the construction of Sani Plus sanitation products, Tibus said he was impressed by the level of quality with which the works are carried out. For him, the process used to make a lost well with concrete nozzles is quite innovative.
A rigorous worker, respecting the quality standards of the Sani Plus brand, Tibus has begun to make a name for itself in the sanitation marketing sector. He was doing more and more works. Although the revenues generated by the sale of Sani Plus products were quite lower than the costs of building large real estate projects, Tibus did not give up.

"I would rather earn a little bit every day than win big once and have nothing left after that," he continues. This''Sani Plus'' contractor currently has at least 115 sanitation facilities (toilets, septic tanks and cesspools) built in the municipality of Abobo. This generated a turnover of more than eleven million CFA francs. In addition, Tibus has created a second company exclusively dedicated to the Sani Plus sanitation products business. This company employs 7 full-time young graduates whose salaries are financed through the sale of sanitation products.

According to him, the money generated by the sale of Sani Plus sanitation products is very useful to him. "Often I take Sani Plus' money to do bidding on public contracts, and that helps me a lot," concluded Tibus Kouadio.
Olivier KONAN
Learning and Communication Manager SSD|PSI Côte d’Ivoire

22 Nov 2019 21:46 #28519 by USAIDssd
On the occasion of World Toilet Day celebrated on November 19, the USAID-funded project Sanitation Service Delivery project introduces you to a woman entrepreneur trained by the project to built toilets for her community in Agboville.

Re: World Toilet Day: The Ministry of Sanitation invites SSD to exhibit its products 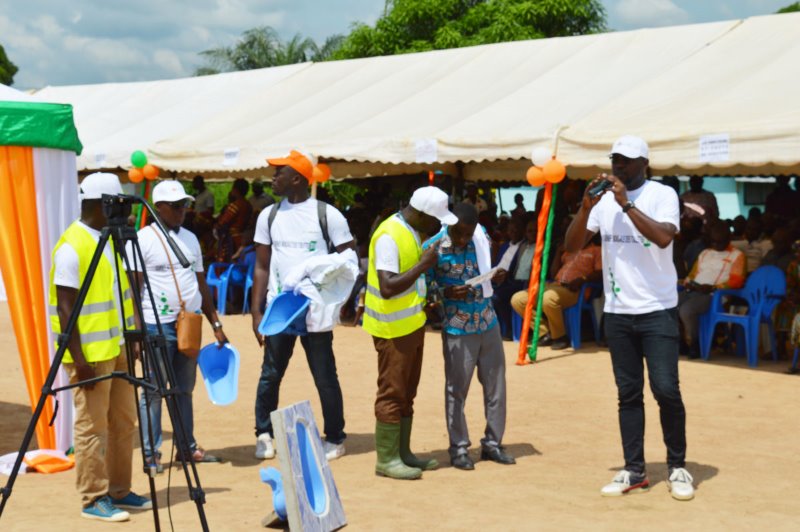 On (26th November) the 2019 World Toilet Day, The Ministry of Sanitation and Hygiene has invited the Sanitation Services Delivery Project (SSD) to exbibit its sanitation products such as Satopan and commercial services brand “Sani Plus”.
In Cote d’Ivoire, held in the village of Bodo, the theme of the celebration day was “"Do not leave anyone aside". Partnering with local entrepreneurs, SSD embodies the theme by stimulating the sanitating market and targeting low-income households.

Funded by USAID and implemented by PSI in Côte d'Ivoire and Benin, SSD project trains and encourages private actors (microentrepreneurs in sanitation) to provide commercial services of sanitation products and services under the brand name "WC Mimin" in Benin and "Sani Plus" in Côte d'Ivoire. SSD presented its improved latrines equipped with Satopan. It is a flap device that eliminates the presence of odours and insects while offering greater comfort to the latrine user.

In Côte d'Ivoire, access to sanitation remains a challenge. According to the 2017 JMP report, 25% of the national population practices open defecation. In response, more than 7,000 sanitation facilities have been built by private operators in households.

In her speech, the Minister of Sanitation and Hygiene, Anne Désirée OULOTO, invited private actors and NGOs such as PSI to make greater efforts to facilitate better access for households to latrines and sanitation products. 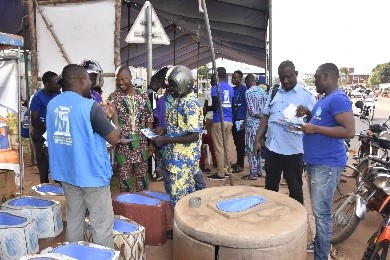 To celebrate World Toilet Day in Benin (28th November), SSD project team in collaboration with the BOÏCON municipality organized the celebration in the presence of government, local and customary authorities. The mayor of the municipality of Boïcon welcomed the awareness-raising caravan. During the celebration, the Team Leader’s SSD project in Benin, indicated that beyond the commune of Boïcon, several communes have benefited from more than 13,000 sanitation products, including 6,000 latrines made by the artisans trained by SSD project.

On World Toilet Day, SSD proudly showcased their progress in increasing access to innovative sanitation products in Côte d’Ivoire and Benin. World Toilet Day was also a reminder that in spite of the progress made in both countries, SSD should expand its reach to ensure that no community will be left aside in improved sanitation.
Olivier KONAN
Learning and Communication Manager SSD|PSI Côte d’Ivoire

Last Edit: 16 Dec 2019 14:04 by USAIDssd.
You need to login to reply
Share this thread:
Recently active users. Who else has been active?
Time to create page: 0.893 seconds
Powered by Kunena Forum