Discussions about my PhD work (hoping to complete by 2021): Planning city-wide FSM services in small towns in India

Discussions about my PhD work (hoping to complete by 2021): Planning city-wide FSM services in small towns in India

I started my PhD journey in July 2016 with Prof. N C Narayanan at Centre for Technology Alternatives for Rural Areas (CTARA), IIT-Bombay with financial support from the Institute for 5 years. I explored quite a bit before deciding that my research inquiry will be qualitative in nature and use case study/multiple case study as research strategy. Since FSM was gaining traction and a colleague was already studying stickiness of the centralised imagination in sanitation sector, I decided to broadly look at how FSM is being planned in small towns. I was earlier thinking of analysing the case studies using theories related to sociotechnical change, but decided to stick to planning of which I have practical understanding and experience.

I am almost done with the case of Alleppey, a town in Kerala and some initial work in Dhenkanal, Odisha. I would have been on the field this time around, hoping to finish the field-work but had to be put on hold due to on-going pandemic. I am using this time to learn the craft of academic writing (I come with a strong practice background) while working on a couple of papers, but will probably take some time to see them published.

I chose to  study towns in Kerala and Odisha as the performance of the two states has been starkly different. While Kerala had near universal coverage of toilets according to the Census 2011, it has not been able construct treatment plants over the last decade. This is despite a 2011 order from the High court of Kerala to treat domestic wastewater. On the contrary, Odisha had nearly one-third urban households defecating in the open but have constructed faecal sludge treatment plants in 11 towns and implemented deep-row trenching as an interim measure in many other towns.

To be honest, I am not sure at the moment but will probably also study some aspects of the process followed in other states where FSM is being implemented in many towns. While I was at C-WAS, CEPT university, I was part of the team supporting the towns of Wai and Sinnar, I suppose I could add case of either of these towns.

Please feel free to shoot questions, comment, suggestions, references to other case-studies, planning frameworks and anything that you think a PhD candidate trying to understand planning processes (for FSM or sanitation or any basic service) needs to know

PS: This post was due for quite some time, especially since as a moderator, I  have been suggesting other graduate students to use this forum in their research process rather than simply posting the outcomes of their research
Paresh Chhajed-Picha
Researcher at Indian Institute of Technology - Bombay, India
This email address is being protected from spambots. You need JavaScript enabled to view it. Twitter: @Sparsh85
Wikipedia: Sparsh85

Co-moderator of this discussion forum
(Under internship contract with Skat Foundation funded by WSSCC)
The following user(s) like this post: nirupaman09
You need to login to reply
Less

18 Jun 2020 13:24 #30117 by neildias
Hi Paresh,
I am a chemical engineering undergraduate, second year (conditionally in year three due to the corona crisis). I'm from ICT Mumbai, an institution you're probably familiar with, given that you are from IIT-B. I find your work quite interesting, and having developed an interest in such areas myself, I was wondering if I could help you with any work, such as is within my capabilities, because that would help me to see how research works, and get a better glimpse into this field.
Thanks.
You need to login to reply
Less

Happy to read your post and look forward to updates from you.

I support a town called Narsapur in Andhra Pradesh. A small town of 60,000 population with more than 60% urban poor and vunerable. One of the biggest challenges in implementing sanitation services in a small town such as this is shortage of municipal funds, tariff for services such that it is pro-poor and yet helps in sustaining quality service delivery. Would be keen to learn from you about any useful models / lessons that you study. Also, feel free to add Narsapur to your list of cities. Will be happy to support.

best
Malini
Malini
You need to login to reply
Less

19 Jun 2020 20:22 #30131 by paresh
Dear Malini,
Thank you for your kind words. I certainly will keep posting updates here and hopefully also presenting and publishing.
The future course of my research is contingent upon how the CoVID-19 situation evolves and time left after I can resume field-work. Off course, I am aware of ASCI's work in Narsapur and hope to include in my research.

Dear Neil,
Unfortunately, I have no expertise in the area of your work. But I do know that characterisation of faecal sludge and solid waste is under-studied. You could look at work of Prof. H S Shankar (IIT-Bombay) and  Prof. Ligy Phillips (IIT-Madras).

Thanks a lot for the tips, I will do so. Good luck with your research!
You need to login to reply
Less

25 Jul 2020 19:57 #30369 by paresh
Dear All,
Sharing the abstract and presentation of a work in progress paper based on my first case study  of Alleppey, Kerala. I recently presented this at a conference and currently  writing this paper with my supervisor Prof N C Narayanan. A short description below.

This is a qualitative study to understand the challenges faced by local governments in planning and implementing city-wide FSM services. Besides analysing documents like legislation, State Sanitation Strategy, government orders, local government plans, we use semi-structured interviews of officials at the local government and with various state government agencies. We used the enabling environment framework (first proposed by Luthi, Morel, et al 2011 through CLUES guidelines) to analyse the same. We found that all the six factors that constitute enabling environment  to be atleast partially facilitative (see table below) and the ULB officials are aware of ways to overcome the inadequacies. Lack of support by the local leadership is the single barrier in installing sanitary infrastructure.  We find other factors also at work in the process, viz; (lack of) external support, (lack of) knowledge management and vested interests and therefore call for expansion of the enabling environment framework itself. 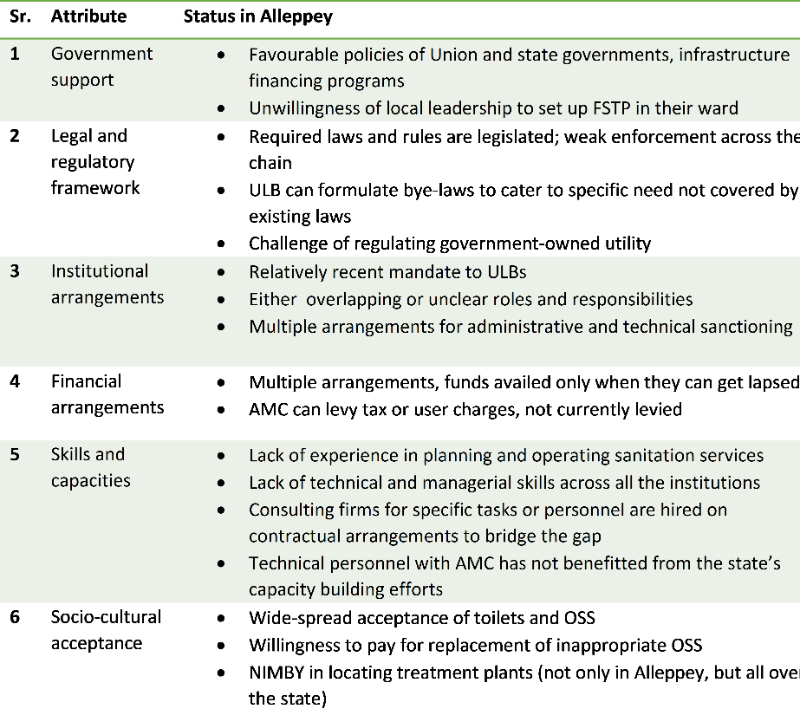 A few questions that I continue to have are: Critique and feedback is welcome.

PS: I also presented a version of this at CEPT Research Symposium 2020 at CEPT University, Ahmedabad.
Paresh Chhajed-Picha
Researcher at Indian Institute of Technology - Bombay, India
This email address is being protected from spambots. You need JavaScript enabled to view it. Twitter: @Sparsh85
Wikipedia: Sparsh85

You need to login to reply
Recently active users. Who else has been active?
Time to create page: 0.371 seconds
Powered by Kunena Forum