Around 2 billion people infected with worms (helminths) - so why are there so few clinical photos available?

Around 2 billion people infected with worms (helminths) - so why are there so few clinical photos available?

Around 2 billion people infected with worms (helminths) - so then why are there so few clinical photos of helminths in the human body available?

The number of infected people is a rough estimate, see here: en.wikipedia.org/wiki/Helminthiasis#Infection_estimates
It could be 1 billion, 2 billion or perhaps even more. This is around 30% of the world population!

It is a neglected tropical disease ( en.wikipedia.org/wiki/Neglected_tropical_diseases ) and it is neglected because it mainly affects only the poor, the children, people with no voice. And because it doesn't kill directly (the worms have no desire to kill their hosts!) only indirectly via malnutrition, diahrroea etc.

My contribution to raising awareness for this is to improve the relevant entries on Wikipedia and to gather photos that show the terrible impacts that these worms can have on the human body.

I have been hunting around for photos since October last year and am still baffled why so few seem to exist. It could be that doctors are too busy treating their patients and don't have the time or energy to take photos. Or perhaps in those countries where worms are rampant, people don't have the money to pay for surgical procedures?

This might explain why the only photos that I have managed to get hold of so far are from South Africa.

Via a tweet by Alison Parker about a presentation by Colleen Archer, and a good word by Chris Buckley, I got connected to Larry Hadley from South Africa (who posted here on the forum).

Larry has been very kind and helpful and has dug out relevant photos for me and has provided me with detailed descriptions of the medical procedures that were being carried out - which I have included in the flickr photo descriptions.

The photos are available here in this set (I am hoping to expand this set with many more photos):
www.flickr.com/photos/gtzecosan/sets/72157648282032913

To give you three examples of photos that you will find in this set (click on the link to get the full description of the photos): 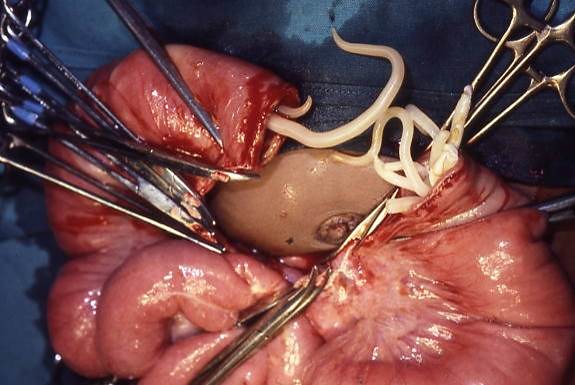 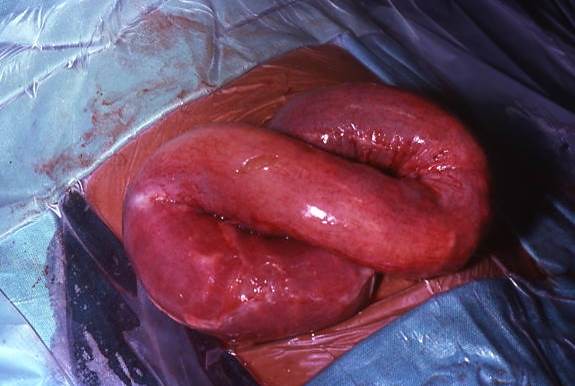 Ascaris infection: Antimesenteric splitting of the outer layers of the bowel wall due to a large amount of ascaris (South Africa) by Sustainable sanitation , on Flickr 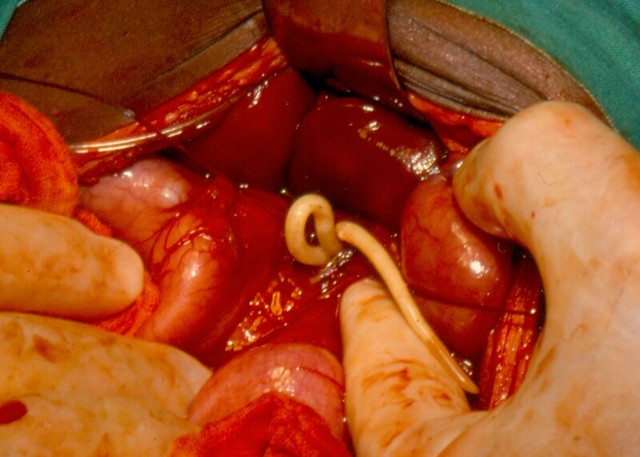 Adult ascaris worms being removed from the bile duct of a patient in Africa by Sustainable sanitation , on Flickr

My next step will be to incorporate these photos into the relevant Wikipedia article(s), like the one on Ascariasis and on helminthiasis.

Here are my questions to you: Regards,
Elisabeth
Dr. Elisabeth von Muench
Independent consultant located in Ulm, Germany
This email address is being protected from spambots. You need JavaScript enabled to view it.
Twitter: @EvMuench
Founder of WikiProject Sanitation: en.wikipedia.org/wiki/Wikipedia:WikiProject_Sanitation
My Wikipedia user profile: en.wikipedia.org/wiki/User:EMsmile
You need to login to reply
Less

04 Mar 2015 05:58 #12331 by F H Mughal
Aren't you drifting towards the surgical side of medicine? I'm afraid, these pictures, disturbing as they are, has nothing to do with the objectives of this forum.

04 Mar 2015 08:09 #12335 by Elisabeth
Hi Mughal,
Thanks for raising this concern. I am the last one who wants to violate our forum rule's about not posting off-topic posts (see rule 8 here: forum.susana.org/forum/rules ). It is indeed very important to stay on topic.

Naturally, with photos that cover medical issues, it is getting close to border-line. However, let me explain why I think these photos are relevant for this forum:
Now I also wonder if I should rather go to some discussion forum on medical issues and perhaps I get more responses there if I ask for such photos. But I have already tried that with the HIFA2015 Dgroup (HIFA stands for Healthcare Information for all: www.hifa2015.org/ and en.wikipedia.org/wiki/Healthcare_Information_For_All ) which has 7000 members, mostly health practitioners, but also there I got only very few leads and responses. It's a neglected disease.

A disease that affects 2 billion people and that is mainly caused by lack of sanitation needs to be publicised more widely - also on this forum - don't you think?

How did we manage to eradicate intestinal worms in the countries on the North? Yes, our colder climate had something to do with it. But a major factor was also better sanitation and hygiene.

And finally, why do we talk about stunted growth in children on this forum, and WASH and nutrition, environmental enteropathy and so forth ( forum.susana.org/forum/categories/92-nutrition-and-wash ) - one could also argue that these are "medical" topics that stray too far away from sanitation topics. I don't think so. Same issue as the one for helminths - it is about raising awaress about the linkages between lack of sanitation and these diseases / conditions.

05 Mar 2015 14:36 #12367 by caetano
I think the WHO used to produce a CD with a collection/electronic library of publications around water, sanitation and health. If I am not mistakened, this CD also contained pictures and also some videos that are along the lines of what you are looking for. I think I still have this (somewhere) in my office. I will look out for it.
Cheers,
Caetano
Caetano
University of Victoria
You need to login to reply
Page selection:
Share this thread:
Copy URL
Recently active users. Who else has been active?
Time to create page: 0.929 seconds
Powered by Kunena Forum