02 Jun 2013 17:03 #4563 by danielfcd
Hi guys, my name is Daniel Dias, I am a PhD researcher in the group of Professor Marcos Von Sperling at the Federal University of Minas Gerais (UFMG) in Belo Horizonte, Brazil. I started working on my topic in July 2012 and plan to finish mid 2016. My universities web page is: www.ufmg.br/ , and my faculties web page is: www.desa.ufmg.br/ for information about our institution.

Below I present the topic of my work as well as a pdf file attached:

The combined treatment system will be composed of the following units in series:
a) UASB Reactor;
b) Polishing Pond 1 (unbaffled);
c) Polishing Pond 2 (with baffles);
d) Rock filters with decreasing grain size;

++++++++++++
Daniel belongs to a larger group of MSc students and PhD students funded by a grant of the Bill & Melinda Gates Foundation:
forum.susana.org/forum/categories/97-ena...n-africa-and-se-asia
Mr Daniel Filipe Cristelo Dias (PhD in Sanitation, Environment and Water Resources by the Federal University of Minas Gerais (UFMG), Brazil; MSc in Civil Engineering: Geotechnics and Environment by the Universidade da Beira Interior (UBI), Portugal; and BSc in Civil Engineering by the Universidade do Algarve (UAlg), Portugal).

Re: Large Capacity Building Project in sanitation (UNESCO-IHE, The Netherlands and Sub-Saharan Africa and SE Asia)

Your project "COMBINED SOLUTION OF UASB REACTOR, POLISHING PONDS AND ROCK FILTER FOR WASTEWATER TREATMENT AND REUSE IN DEVELOPING COUNTRIES.", sounds to me similar to ongoing DEWATS-Projects:

Re: Large Capacity Building Project in sanitation (UNESCO-IHE, The Netherlands and Sub-Saharan Africa and SE Asia)

Sorry for the long time it took for me to respond, as I have been busy and only now had the time to come here and take care of my profile today.
In relation to your point, this system (with various different setups) has been going on for 11 years where numerous papers and thesis have been produced based on the results. Although the system you showed me does sound the same I still think it is a different concept and that the end results will be different.
Does the DEWATS project produce an effluent which complies with the WHO guidelines for unrestricted irrigation?
What is the area to inhabitant ratio for the DEWATS system?
Ammonia removal?

Hopefully in October you will have access to a paper which we will be presenting and it should answer some of your questions.

Other than that, I thank you for your comment and please any more information would be welcomed, as well as expertise.

As promised here is my presentation in .pdf format for anyone that is interested. I will not be posting the full paper yet, seen that we will be sending it in to be published. I will keep you updated on that.

Thanks,
All the best,
Daniel
Mr Daniel Filipe Cristelo Dias (PhD in Sanitation, Environment and Water Resources by the Federal University of Minas Gerais (UFMG), Brazil; MSc in Civil Engineering: Geotechnics and Environment by the Universidade da Beira Interior (UBI), Portugal; and BSc in Civil Engineering by the Universidade do Algarve (UAlg), Portugal).

Thanks for sharing the presentation that you gave at the IWA conference in Nairobi in October.

I have a few questions:

(1)
Does this system (UASB followed by polishing ponds and rock filters) exist anywhere else in Brazil or elsewhere in the world? If not, then why not if it is being operated successfully since 10 years at this one site?

(2)
Is the flowrate of your plant really only 33 m3/d? That is rather small, so it is just a small pilot plant, yes? Which wastewater is it receiving exactly, is it just the wastewater of the university? Then you probably have large flow variations?

(3)
I noticed the influent is quite diluted with COD only around 350 mg/L. Why is that? Are the toilets using huge amount of flushing water or is it rather rainfall intrusion? You have very high rainfall in that area I saw in your presentation.

(4)
What is your definition of dry/wet?

(5)
Do you also have graphs showing the variations in influent and effluent concentrations? You only showed bar charts but without giving any information on variations (also no error bars on the graphs). How many samples are taken per week or per month? Has the pilot plant been monitored closely for a period of 10 years? That's very impressive!

(6)
What is the effluent concentrations that the plant should achieve according to the Brazilian standards?

(7)
The slide on the pathogen removal was hard to make out in the pdf file (as there are boxes on top of each other).

( 8 )
In a related note: we hear so much about UASBs in Brazil. What is usually the further ttreatment process downstream of the UASB? Anything? Or is is discharged directly? Or usually wetlands or ponds after the UASB?

(9)
And do you have more photos of UASBs that you could share from elsehwere in Brazil?
It would be great if we could add them to this little collection which I recently started in the SuSanA flickr database (found only 3 good ones so far! Was looking for photos of UASBs for municipal wastewater in developing countries):
www.flickr.com/photos/gtzecosan/sets/72157636930324215/

And the photo that you had in your presentation from your pilot plant was not really clear to me. Could you send (or attach in a post) more close-up photos of the different stages of the process?

Again, thanks for sharing about your PhD work on this forum, and I hope you are also finding the feedback or information that you are finding on the forum useful for your PhD work.

Sorry for taking a while to answer, things have been quite busy lately. I'll try to answer the questions the best I can.

(1) - As far as I know, I haven't heard of this system as it is (UASB + PP + Rock Filter) operating in Brazil or in other parts of the world, especially with low Hydraulic Retention Times and shallow depths (0,70m - 0,50m). Usually the ponds operate with depths of 1,0 to 1,5m. Well I don't think it has been implemented anywhere else because its still in an experimental phase and we are trying to reduce land requirement well maintaining/increasing removal efficiencies. Other systems remove more COD and BOD (activated sludge for example) than this system, but are much more expensive to run and maintain. This system is indicated for small to medium sized communities.

(2) - The flowrate had a mean value of 33 m3/d over the 10 years, this varied for testing. The maximum flowrate is 40 m3/d, which is equivalent to 250 inhabitants. Like so, the average land requirement per inhabitant is between 2,0 m2 to 2,5 m2, depending on the flow. Our objective now is to reduce that to around 1,0/1,5 m2 per inhabitant while increasing removal efficiencies.
The wastewater comes directly from the city of Belo Horizonte, where it is diverted from the conventional treatment line at the wastewater treatment plant and fed to our experimental units.

(3) - Stormwater infiltration happens during the wet season, which as you mentioned rainfall is high, so it is quite diluted. It could also be attributed to clandestine connections to the sewage system.

(5) - Yes we do have graphs showing variations, which will be part of the final paper for publication. I'll send you a copy when it gets publicized. In terms of samples, most were done on a weekly bases, where others fortnightly, and others were during a limited time (pollutants for example). But overall, the treatment line had close monitoring.

(9) - I've just email a couple of photos from our experimental unit, I'll try and get some more photos of different UASB reactors.

Here are some photos of the treatment line: 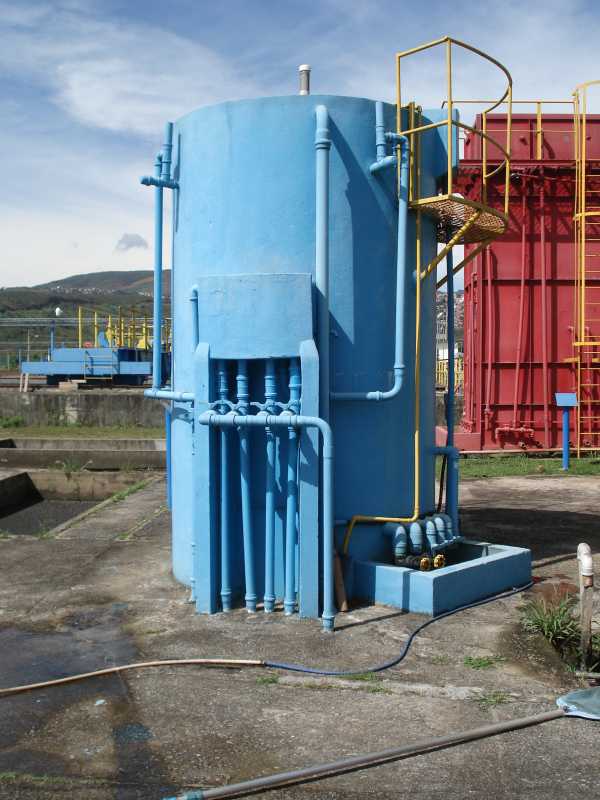 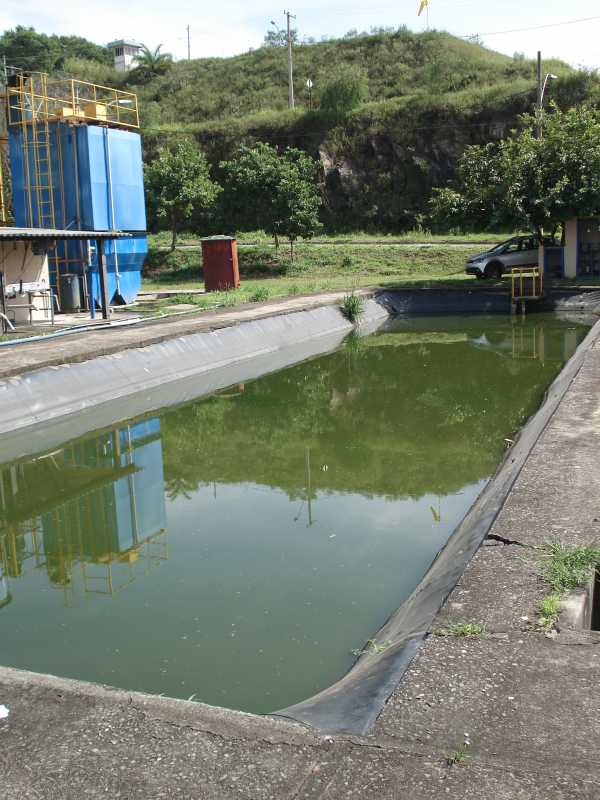 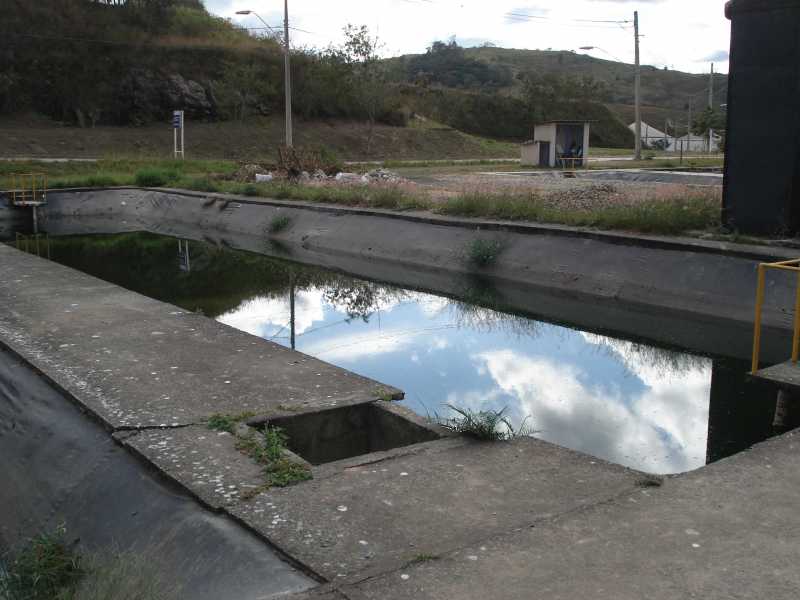 Third pond with rock filter in the final third: 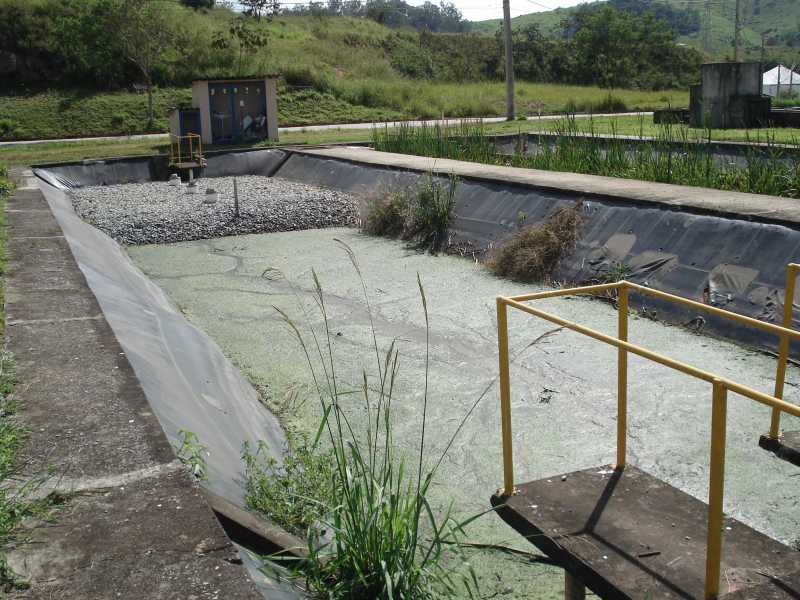 You need to login to reply
Page selection:
Share this thread:
Copy URL
Recently active users. Who else has been active?
Time to create page: 1.155 seconds
Powered by Kunena Forum