Improve International has an ongoing compilation of statistics that shows that failure rates in sanitation. The statistics can be seen at:
( improveinternational.wordpress.com/handy...sanitation-failures/ ).

While the statistics make a disappointing reading, one aspect stands out quite clearly and that is: sanitation failures occur in different geographical locations (Africa, South Asia, etc); and in all compartments of sanitation.

For example, issues related to open defecation are reported in Madagascar, Ethiopia, Kenya, Sierra Leone, Uganda, Cambodia and India. Shocking state of school toilets is reported in South Africa, Afghanistan, Bangladesh and Pakistan. Failure of eco-toilets scheme is reported in China. School toilets requiring extensive repairs in reported in Maldives and Pakistan. In Ghana, only 60 per cent of the new latrines are used. In Peru, 85 per cent of the latrines are unusable. And, in India, 50 per cent of the subsidized toilets remain unused, or are being used for purposes other than sanitation. One can very well imagine the health impacts of “defective” sanitation.

The above observations show failures in all compartments of sanitation (failure of sanitation models; open defecation remain despite various interventions; bad workmanship in toilet construction; operation and maintenance of toilets, etc).

It seems like, despite all sanitation promotion and sanitation marketing, the targeted population remain untargeted. On the surface, it appears, the needs of the population are not taken into account, and there seems to be superimposing of sanitation models that, in practice, don’t work in that particular location. Sanitation presents itself to be a hard nut to crack. Failure is reported not only because of the attitude of the people, governments have also its share as well. Politicians, decision-makers and the key government departments (e.g., the local government department) pay little attention to sanitation. This has resulted in poor quality of the sanitation-related infrastructure.

To me, the bottom-line here (as sort of remedial measures, or course-correction) is: take community needs into consideration; take community members on board; create sanitation demand; work on behavioral change; and develop partnerships in sanitation.

I was just reading this interesting paper looking at Politics and Open Defecation in Mumbai, which seems also to make some important points about the way that provided systems are used.

The Politics of Open Defecation: Informality, Body, and Infrastructure in Mumbai by Renu Desai1, Colin McFarlane, and Stephen Graham

It makes a lot of interesting observations, the one I was thinking about was the way that politics on a small scale impact on the way that provided latrines are used - for example residents limiting access to others because of worries that other people will make it dirty.
The following user(s) like this post: F H Mughal
You need to login to reply
Less 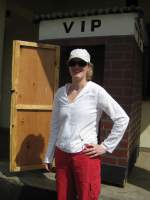 25 Jun 2015 16:05 #13867 by Improvedavis
Dear FH Mughal - I'm sorry to be late to this discussion, but it was just recently brought to my attention. I appreciate your comments on our list of sanitation failures. Your comments show just what we were trying to accomplish - to bring attention to the scope and various reasons for failure. Since our first blog on the topic of water and sanitation failures in August 2012 ( improveinternational.wordpress.com/2012/...sanitation-projects/ ) these pages have been the most popular ones on our website, with thousands of views and several references in other blogs and articles.

A little history on why I started compiling this list. When I started working in international development 16 years ago, I was told that about half of water projects led to failed systems. I saw some of those firsthand. I’d always wondered whether any organization was tracking the success and failure of water systems. Of course, most non-profit development organizations prefer to focus on the numbers of systems built and anecdotes of success, because they need to entice donors to support their organization.

A decade plus later, in various presentations on sustainability, I met some people who said “there are no good numbers on failures” and others who quoted one old water failure statistic. I had seen horrendous toilets and abandoned latrine pits during visits to rural communities in developing countries, but at that point not many people had (or shared)details on sanitation failures.

This list of sanitation failures, which I’m sure are not complete, were our way to start trying to get at 1 & 2. They are not intended to “point fingers” or place blame – rather, they are intended to bring us together in a common challenge. All of the information was made public by the various organizations or governments involved, so I’m not spilling any secrets. We’re all here to help people in need, right?

As you say, “Sanitation presents itself to be a hard nut to crack.” But we have to recognize that we haven’t cracked it so that we can start using different tools. I’m hoping the popularity of these lists of failures shows a strong interest in doing just that.
Susan Davis
Executive Director
Improve International
The following user(s) like this post: Elisabeth, F H Mughal
You need to login to reply
Less

Thank you for your enlightened post. It gives out a great deal of information! I appreciate.

Do you currently have any project in Pakistan?

It is an interesting endeavour you have embarked on... However, I don't fully understand your methodology. You call it "statistics on sanitation failures" but I don't really see the statistics part, it is more a snap shot of what other people have published regarding "failed sanitation projects"?

And how will you keep it updated? E.g. I see for 2014 only one entry which is a bit misleading, as if there was only one failed sanitation project worldwide for 2014?

If someone had a capable intern, he or she could relatively quickly do a desktop study and find more relevant reports.

Or you could go down the crowdsourcing route: A Wikipedia article could be created where everyone can then contribute to when they see a report of a failed project and it would ideally continually update "itself".
As a starting point, it could just be a subsction here perhaps:
en.wikipedia.org/wiki/Sanitation

I see that you have mainly focussed on CLTS and open defecation (and some school projects)... There could be further categories, e.g. also for failed centralised wastewater treatment plants in developing countries? Failed micro-finance schemes (see forum.susana.org/forum/categories/191-th...nance-for-sanitation ), failed reuse schemes and so forth?

Kind regards,
Elisabeth
Head moderator of this Discussion Forum
(with financial support by GIZ from July to October 2021)

Dr. Elisabeth von Muench
Independent consultant located in Brisbane, Australia
This email address is being protected from spambots. You need JavaScript enabled to view it.
Twitter: @EvMuench
Founder of WikiProject Sanitation: en.wikipedia.org/wiki/Wikipedia:WikiProject_Sanitation
My Wikipedia user profile: en.wikipedia.org/wiki/User:EMsmile
The following user(s) like this post: Marijn Zandee
You need to login to reply
Less

28 Jul 2015 12:29 #14330 by Improvedavis
Dear Elisabeth - thanks for your comments and questions. This and the water "statistics" page were not intended to be rigorous academic studies. Rather they are a way to pull other studies (rigorous or not) together to give snapshots of a rather large problem. We add information when we come across it. We have begun talking to a couple of universities about possibly doing a more thorough search (ideally in some languages other than English) and some sort of analysis. As you're aware, it's hard to get real-time information because studies and analysis don't come out for one or two years after data were collected.

As you've recommended, we have brought on an intern who is adding some of this information to the Wikipedia WASH page. en.wikipedia.org/wiki/WASH#Failures_of_sanitation_systems We welcome any additions or improvements to this. There appears to be a hunger for this information - our failure pages are consistently the most visited on our website.

SuSanA Talk: Failing forward and future proofing. What we can learn from sanitation failures


++++++
Note by moderator: second link has been fixed and is now correct.
Susan Davis
Executive Director
Improve International
The following user(s) like this post: joeturner
You need to login to reply
Less

29 Oct 2015 13:01 #15678 by Elisabeth
Just to update people and to ask for further input:
The list of failures in water supply and sanitation which Susan's organization had started on its website has now been transferred to the Wikipedia page on WASH and looks like this now:
en.wikipedia.org/wiki/WASH

It is grouped by water supply and then by sanitation, and in each section by country. The list of failures in sanitation (7 countries) is much shorter than that on water supply (41 countries):
en.wikipedia.org/wiki/WASH#Failures_of_sanitation_systems

This probably reflects the amount of research that has been done on both, i.e. more research on water supply systems (?).

I am not yet totally convinced if the format that we have chosen is ideal. What are your comments?

Does it make sense to keep it on the page for WASH or would it be better to move it to a separate list type article? Like for example this list article:
en.wikipedia.org/wiki/List_of_incidents_...olence_against_women

Are there other studies that should be added in, especially more recent ones?

There are also still some references that need to be improved (Susan's new intern is working on that).

And some more photos would be good as well. Would anyone like to put some forward that show failed water supply or sanitation systems?


Regards,
Elisabeth
Head moderator of this Discussion Forum
(with financial support by GIZ from July to October 2021)

03 Nov 2015 22:50 #15760 by Improvedavis
Thanks Elisabeth for requesting more information (and photos!) We'll continue to add to this list as we find more. There is a hunger for this information in the sector. Also, I will be facilitating a panel discussion at Emory University Nov 18 in honor of World Toilet Day on lessons learned in sanitation.

Please share any important lessons and/or documents you think we need to discuss.
Susan Davis
Executive Director
Improve International
You need to login to reply
Less

14 Oct 2019 04:40 #28300 by Elisabeth
With all these publications, conference events and other activities about "learning from failure" (see e.g. here: forum.susana.org/learning-from-failures/...water-currents-issue ) I am just wondering if anyone sees an opportunity to capture this knowledge in the existing Wikipedia article on "Failures of water supply and sanitation systems":
en.wikipedia.org/wiki/Failures_of_water_...d_sanitation_systems

The page doesn't have high daily view rates at present (only about 6 views per day) but that could change if the article was improved, linked from other pages and became the "go to" place for people to look up information on "learning from failure in the WASH sector".
If anyone has an interest in working on this but doesn't know where to start then please reply in this thread or contact me.

Regards,
Elisabeth
Head moderator of this Discussion Forum
(with financial support by GIZ from July to October 2021)

Dr. Elisabeth von Muench
Independent consultant located in Brisbane, Australia
This email address is being protected from spambots. You need JavaScript enabled to view it.
Twitter: @EvMuench
Founder of WikiProject Sanitation: en.wikipedia.org/wiki/Wikipedia:WikiProject_Sanitation
My Wikipedia user profile: en.wikipedia.org/wiki/User:EMsmile
You need to login to reply
Share this thread:
Copy URL
Recently active users. Who else has been active?
Time to create page: 0.739 seconds
Powered by Kunena Forum