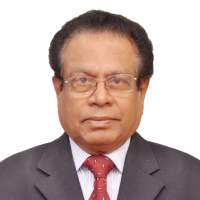 1987-20013: With UNICEF in different capacities;
1987-1989: Assistant Project Officer in one State Office. Looked after water and sanitation Program including Guinea worm Eradication, immunization and Women in Development
1989-91: Project Officer (Sanitation) for a region: Handled Sanitation Program in two most populous States of India viz., Uttar Pradesh and Bihar
1991-1998: Sanitation Coordinator for India. This was a country level position and guided the program through out the country that included advocacy with the Government of India on various innovative programs.
1998-2003: Head of WASH for UNICEF under Oil for Food Program in Iraq and then Sr. Project Officer and Advisor, WASH for Central Asian Countries with focus on Uzbekistan, Tajikistan and Turkmenistan.
Some of the professional achievements during 1987-2003 are given below:

i. As adviser on WASH for three CIS countries, was able to bring UNICEF concern in the agenda of the national Government. This was through strong advocacy at the highest policy level and introducing innovative ideas into programme planning and implementation. A number of community-based interventions were introduced in all the three countries that were totally at variance with the centralized system.

iii. Involved in successfully handling the largest ever WASH programme in a highly sensitive environment in Northern Iraq where both management and professional skills were put to test. Based on a need assessment survey, developed appropriate strategies for WES interventions in both urban and rural areas.

iv. In rural areas, where the strategy was to increase coverage and reduce regional disparity, a mapping exercise was undertaken to identify un-served areas and give priority to the no-source villages for reducing the gap. Different cost-effective and appropriate technologies were tried out by using surface and ground water resources. 30 NGOs were involved in the implementation of these projects. The interventions included construction of 1,100 new and rehabilitation of around 600 existing water projects. Over 27,000 twin pit pour flush latrines were constructed. 4,000 village level functionaries were trained on the operation and management of water projects. Access to water supply, through the programme intervention, increased from 63% to 90% over a three-year period and sanitation (in terms of toilets) from 45% to 65%. Another 18% could construct their own toilet with out government support through motivation. Proposals were prepared for introducing vermi-composting, bio-gas, water pumping in remote areas using solar and wind energy.

v. As the Lead Agency in water supply and sanitation programme in northern Iraq, had the over all responsibility of coordinating with other UN agencies such as HABITAT, FAO, WHO and UNOPS besides the concerned local authorities.

vi. As part of community participation and hygiene education in Northern Iraq, was instrumental in developing several training modules and guidelines and preparation of a set of 7 flash cards for promoting hygiene education and a guidebook for school sanitation. Introduced School Sanitation Programme in 250 schools.

vii. Was on a Drought Mission to the CIS states viz, Kazakstan, Uzbekistan, Tajakistan and Turkmenistan in July/Aug, 2001. Was the member of an inter-disciplinary group of experts on health and nutrition, education, child protection and communication. Prepared short-term action plans and medium/long-term strategy relating to water sanitation for tackling drought in three countries viz, Uzbekistan, Tajakistan and Turkmenistan.

viii. At the invitation of the UNICEF's Egypt Country Office visited Cairo thrice (in 1996, 1997 and 2004) to make an assessment of the Sanitation Programme in that country and suggest appropriate interventions to accelerate sanitation coverage. The focus of the first visit was on choice of technology, delivery system, hygiene education, community participation and credit. The second visit was a follow up to observe the implementation of strategies suggested and recommend any modification to the interventions implemented. The third was on assessment of the WES program.

ix. Was deputed to South Africa for a period of 6 weeks during April-June'95 to prepare a strategy paper for WES and draft the Water & Sanitation chapter of the New Country Programme in consultation with the Government of National Unity, South Africa. Completed the assignment successfully. In addition, prepared 8 proposals for raising funds through prospective donors.

x. As a member of the Government of India's Working Group on Sanitation for Ninth Five Year Plan, was able to influence the proposed national policy pertaining to IEC, alternate delivery system for sanitation, sanitation upgrading and promoting hygiene through schools to reflect UNICEF’s concerns and priorities.

xi. As a special invitee to the Expert Committee on Rural Sanitation Programme set up by the Government of India, provided inputs on the concept and components of Sanitation and drafted the section on Perspective Plan for Sanitation in Rural India through mobilization of voluntary action.

xii. Developed the concept of "Rural Sanitary Mart" as an alternate delivery system to promote sanitation as a package. The Government of India adopted the concept and introduced it all over the country. These marts are also to support community-based hand-pump maintenance (by supplying crucial parts) and distribution of ORS in rural areas.

xiii. As nodal officer for coordinating the CDD-WATSAN strategy in India, in collaboration with the Health Section, organized the following activities in 15 districts in as many states spread over the different regions of the country.

xiv. Coordinated a number of innovative sanitation projects with community participation and with the active involvement of NGOs in different Indian states between 1991-1998. These were: i) The self-financing sanitation projects in West Bengal, Assam and Delhi, ii) A project promoting the concept of 'cleanliness' (both domestic and settlement levels) in Tamil Nadu, iii) A project pursuing a three pronged approach to subsidizing rural sanitation in Uttar Pradesh (the largest state in India), iv) the Nirmal Grama Yojana (Clean Village Scheme) through the Panchayati Raj System in Karnataka, v) Facility Park - (Community Latrine with private ownership) in Rajasthan, vi) Highway Sanitation (A part of Social Marketing Strategy to accelerate sanitation coverage) and so on.

xv. Developed and implemented several training programs pertaining to water and sanitation and prepared materials for the same.

xvi. Replicated the concept of "Village Contact Drives" introduced in SWACH (where I was a Project Advisor) for creating awareness on hygiene and mobilizing community for management of drinking water sources and better hygiene practices.

1986-1987: Full time Consultant for a Guinea worm Eradication Project In one Province viz., Rajastan, that had reported the highest number of cases. Was instrumental in contributing a number of innovative strategies that helped in reducing the case; some of these strategies were replicated in India that ultimately led to eradication of guinea worm disease in India.

1970-1986: Joined Operations Research Group, a think tank of the famous scientist and industrialist, Shri Vikram Sarabhai that later became a commercial enterprise. Rose to the rank of General Manger (Chief Consultant)and was the all-India Coordinator for consultancy projects in rural development. (During this period got involved in Water Supply Projects and continued with that area till date.

1967-1970: Project Evaluation Officer in India's Planning Commission(a post of Indian Economic Service). Was responsible for carrying out evaluation studies of centrally sponsored programs in one province.

1963-67: This was the first posting after the college. Was Research Officer attached to the State Planning Board of a Provincial Government in India. Was a member of the professional group in plan formulation, monitoring , assessment and evaluation. Had the additional responsibility of monitoring the activities of the public sector undertakings

Exposure to Planning, Monitoring & Evaluation:
At PG level had Economics as major. Did a Diploma in National Economic Planning & another on Community Water Supply & Sanitation. Was actively associated with plan formulation, review, monitoring & evaluation of socio-economic programs during the 25 years tenure with a State Govt. (Planning Dept), GOI (PE0 -Planning Commission), a leading consultancy firm (ORG) and now UNICEF. As part of sectoral planning and evaluation, was involved in determining technical feasibility and economic viability of various projects.

Organizational, Managerial & Administrative Experience: Handled supervisory/managerial position for over 30 years. By virtue of working in a State Govt, GOI, consultancy firm & UNICEF, acquired varied organizational and administrative experience and skill for greater adaptability to a changed situation. Was responsible for establishing ORG's regional and field offices in the eastern region and developing market. As Project Coordinator (Sanitation) in India country office, provided guidance to 10 field offices during 1991 – 1998. As Head of WES in Northern Iraq guided the largest UNICEF WES programme and supervised 30 professionals, including 9 internationals. As adviser on WES for three central Asian countries, was instrumental to put WES on the national agenda.

Experience in handling Independent Offices:
Was heading PEO, Planning Commission's field office (Government of India) at Cuttack (Orissa) from 1967-70. Became Chief of ORG's Regional Office (Eastern Region) from 1978-86. Also looked after ORG Systems (Computer Division) for two years as an additional responsibility with three field offices covering a staff of 30 computer professionals and 15 others. As Sanitation Coordinator in India Country Office, had a lot of independence in formulating and implementing projects in the area of environmental sanitation and hygiene at country level. As Head of WES in Northern Iraq, enjoyed a lot flexibility to handle a humanitarian program, in a highly sensitive area. Handled a similar responsibility in central Asia.

Communication skill to negotiate and advocate:
Work in a planning set-up called for constant interaction with various depts/agencies. In ORG, the responsibility included an aggressive marketing strategy to sell ideas and undertake effective negotiations besides maintaining good public relations with Government and industry at the highest level. The job in UNICEF India country office called for advocacy and negotiation with very high officials of Government of India, leading Technical Institutions and NGOs. In Northern Iraq and also in central Asia had to interact with politicians and bureaucrats at the highest level for planning and implementation of WES programme.

Association with International Agencies/ Foreign Travel:
Have been associated with several international agencies. The list includes, Habitat, WHO, FAO, UNOPS, DFID, SIDA, DANIDA, USAID, World Bank, UNDP, Dutch, Resources for Future, Washington, Save the Children Fund, UK, Counterpart Consortium, IFRC, JD Associates etc. Have travelled over 30 countries in Asia (includes middle-east and Central Asia), Africa, USA and Europe.
B. B. Samanta, PhD
(The theme of my PhD related to technology transfer in rural water supply and sanitation in India with focus on the role of UNICEF, Berhampur University, India (1997))

You need to login to reply
Page selection:
Share this thread:
Copy URL
Recently active users. Who else has been active?
Time to create page: 0.212 seconds
Powered by Kunena Forum