23 May 2019 06:24 #27491 by Elisabeth
Looks like JMP is working on a new project that is related to what we discussed in this thread, namely how the "safely managed" part would be monitored for SDG purposes in future.

Have a look at this presentation:


It was presented at the FSM 5 Conference in February of this year: fsm5.susana.org/en/downloads/conference-materials

I leave you with the second last slide: 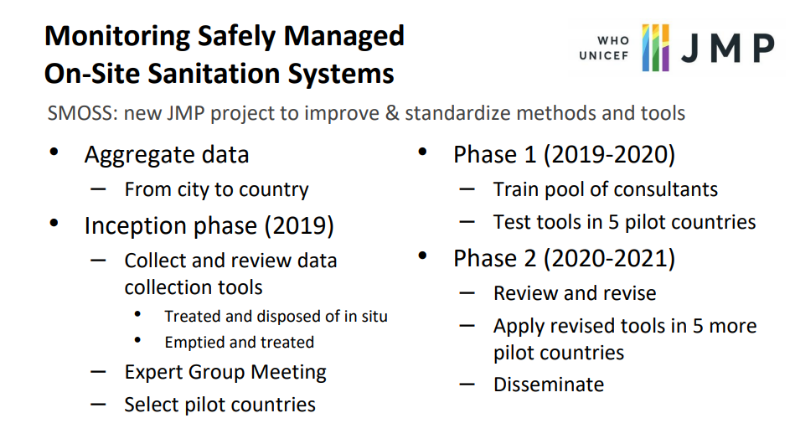 26 May 2019 11:15 #27519 by cecile
The definition of the sanitation ladder still needs to evolve as suggested long ago by E. Kvärstrom and al. Definitions of limited toilets (p. 2) is only based on the sharing factor. So a well maintained toilet shared by two (or more) households and regularly emptied by a desludging operator are still considered as "limited", while it is still the only feasible option for many people and it will still be like this for many years to come.

It also implicitly includes a western cultural factor that has nothing to do with protecting human and environmental health (which is the definition of sanitation). Isn't this a very westernized idea to obsessively focus on non-shared toilets in the domestic sphere? Why would it be acceptable to use public toilets (at work, in school) and not shared toilets, bearing in mind the context (poor housing, non-asphalted roads, very low income and so on)?

As far as I can see, this negatively affects development projects as it does not encourage implementing partners to consider this solution in priority while the impact and efficiency is likely to be higher compared to individual toilets. In the field, depending on the culture, many people are happy to share their toilet with their neighbour. I have even seen the case where the toilet built by an NGO was not to the taste of the household, who then continued using the neighbours' toilet.

In my view monitoring factors should pay more attention to the cornerstone of sanitation i.e. protecting health and environment and in particular on the containment and treatment parts of the sanitation chain, rather than on the number of families using the interface.

Systems like a septic tank followed by a soak pit have been considered unsafe sanitation in Europe for a couple of years. The reason is well known. These systems have been in place for decades and resulted in wide underground water contamination, even when septic tanks are situated not 15 m but 35 m from a source of drinking / recreational water. Experience has shown that these systems do not protect health and environment and yet they are widely promoted in developing countries, including in the definition of safe sanitation in SDGs. Safely managed sanitation should include watertight septic tanks and a secondary treatment. This is probably difficult to achieve for financial reasons but not more not less difficult than non-shared sanitation.
Cécile Laborderie
MAKATI Environnement
The following user(s) like this post: goeco
You need to login to reply
Share this thread:
Copy URL
Recently active users. Who else has been active?
Time to create page: 0.353 seconds
Powered by Kunena Forum