FYI: "Successful" R&D on ABRs at WWTPs in Northern Ireland and Southern California by UK based company Atkins?

FYI: "Successful" R&D on ABRs at WWTPs in Northern Ireland and Southern California by UK based company Atkins?

OCSD's use of ABR in short: Not for bio-gas production! Just for COD/BOD- and sludge reductions for pre-treatment in large scale centralized wwtp, in order to reduce total costs for energy- and space- demand of aeration for activated sludge reactors.

Do any body know about further developments, progress and further scaling up, after this two successful full-scale installations (pilot's)?

Any suggestions are highly welcome. 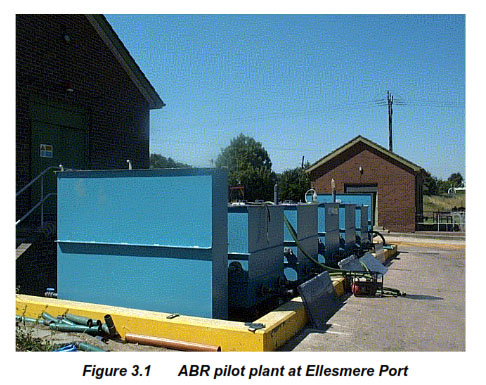 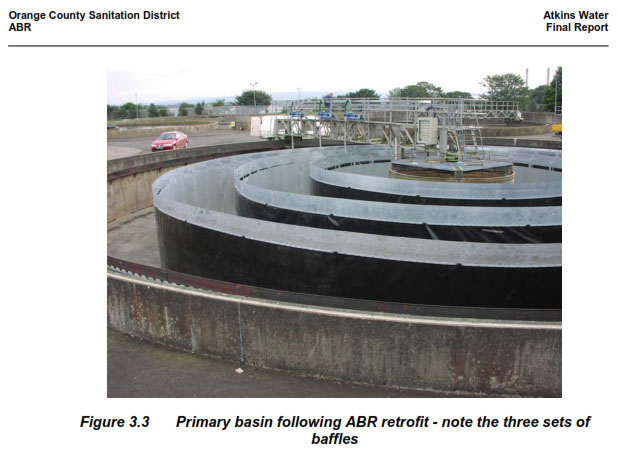 made out of Primary Basin prior to ABR retrofit 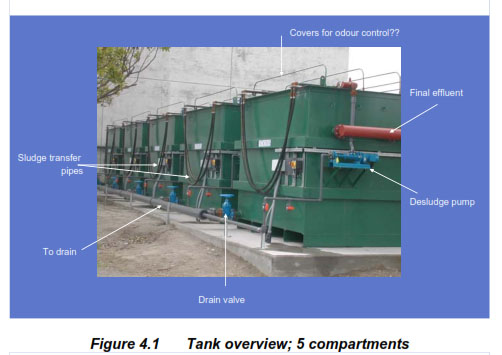 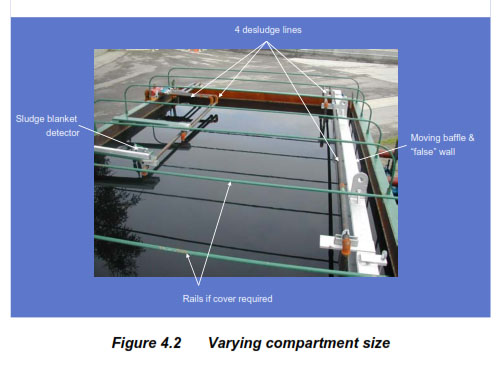 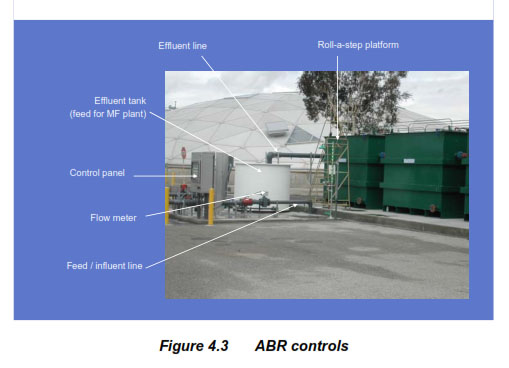 13 Sep 2013 08:45 #5621 by christoph
Dear Detlef,
Thanks for the report by Atkins, very interesting indeed. The EPA report does not contain relevant information about ABR I would say.
Interesting as well how much information is out there which one does not look at.
You said

Any suggestions are highly welcome

so I will comment on some aspects which caught my attention.
You write

.Reading through the report I would not call the installations successful. In contrary, I think the report shows a serious of aspects how it not should be done and why ABR in larger size are not recommendable.

a) Example England and Northern Ireland – 6 hrs hydraulic retention time (HRT).
For a treatment plant 6 hours for a pretreatment is a lot of volume, so high cost. The report says:

similar to a conventional primary tank in the UK

I don´t know the primary tanks in the UK, but for the parts of the world I´have been working in, the typical retention times for primary treatment are in between 30 min (before nutrient removal plants), 1-1,5 hours typical pre-treatment and up to 2 hours for plants where only primary treatment is done. So the costs of an ABR would be 4-6 times higher, beside the need for baffles.

b) The methane is not captured, the tank seemed to be open. This will lead to a lot of odor problems and the methane aspect you discussed here quite often. For a large plant I don´t see this as adequate.

c) In the US the plant had very low COD removal, much lower than the regular settler which was operated in parallel – as the typical task of the primary treatment is to bring down the organic load without energy – this would be a complete failure for the ABR. Beside the aspect b).

So 3 different aspects which hint to … not successful … or did I get something wrong?

My experience with ABR (I wrote it before) is – up to about 2000 pe. an interesting technology as far better than a septic tank and less volume, past that - not recommendable. And it is important not to do too many baffles, to simplify construction and not to have high upstream velocities (in order not to lose sludge, apparently a problem in many ABR which use a anaerobic filter after the ABR to retain the sludge). The Atkins report discusses the velocity aspect in several parts (example):

One additional observation. The report discusses the methane content which went up to 80%.

Usually in anaerobic digestion methane is produced at 60 to 65% by volume and this would be the anticipated level in gas exiting the ABR.

We observed in several UASB as well contents of a about 80%, as other researchers in Brazil as well. A high methane concentration seems to be a chacracteristic of biogas produced in the main stream. The probable explanation is mentioned in the report as well

It should be noted that the solubility of carbon dioxide in water is 90ml/100ml which may explain maximum readings of methane that exceeded 80% volume.

Thanks again for the interesting report.

That is the critical and open discussion I am looking for at Forum-susana. Therefore, I appreciating very much your input.

I had as well the impression "or did I get something wrong?", reading 2-3 reports about "successes". Maybe one of more reasons is the very low organic load at the OCSD wwpt, because of "Mischwasser". I could not find clear information whether sewage and storm-water flowing separated.

Much details about the smaller R&D-ABR at Ellesmere Port wwtp and full-scale ABR-pilot installation at Culmore wwtp, Northern Ireland not given. This two European pre-treatment plants do not have the same design concept. I am still digging for details about at ATKINS. I hope for an "Open Source".

You are right the success is questionable. In my opinion, information found in different reports are not consistent.


"...Several cost assessments indicated that full-scale ABR use could reduce OCSD’s expected capital and operational costs. OCSD’s biosolids processing cost model, which does not include liquid stream (primary or secondary) treatment costs, indicated 20-year present value savings exceeding $35,000,000 for solids handling at either treatment plant if ABRs were used. A simpler model, but one that considers both capital and operating costs for the entire treatment process, suggested that ABRs could provide overall net cost savings compared to using conventional primary clarifiers.

The ABR results were sufficiently positive to justify continuing with plans to retrofit a full-scale primary clarifier. The goals of a retrofit will be to obtain an accurate assessment of the capital costs and subsequently to obtain full-scale operating experience and data at conditions that will be most relevant for OCSD. The planning and construction activities are expected to extend over three years starting in FY 2004/05."

But after that, no further developments I could find in UK and USA... I am wondering too. I am guessing reasons are your a) to c) and main reason probably related Methane emissions!?

By viewing the location of test at wwtp No. 2 of OCSD you may get a good understanding of intended scaling up: http://goo.gl/maps/rTe72

But only from mistakes we are all learning...

While we did invent the ABR many years ago, I have not followed applications well enough to offer any new information to you. I know there are several available in warmer climates such as Africa, but have no information to offer on colder region applications.

If you really want to reduce energy consumption and biosolids production you might consider the anaerobic membrane bioreactor. I am attaching a copy of a paper accepted for publication in Water Science and Technology to treat settled domestic wastewater. With temperature down to 10 oC and with only a 2.5 h HRT, effluent BOD was in the range of only about 5 mg/L and biosolids generation was only 0.03 kg VSS/kg COD removed. We have been operating a pilot plant for the past year on this process in South Korea at 7 to 10 m3/d and a total HRT of 4.5 h, and are currently obtaining effluent BOD of about 5 mg/L as well. We had just started the system as winter temperature approached, but still obtained effluent BOD less than 40 mg/L at 8 oC, but will be going through the same temperatures in a couple of months. Now that the system is well acclimated we are expecting to see removals as in the paper attached. While operating over a year, we have not yet had to remove the membranes for cleaning. Biosolids production has been 0.08 kg/kg COD removed, but we expect that to drop soon to levels similar to laboratory studies. Just thought you might be interested in seeing what is possible today.

In my opinion, information found in different reports are not consistent, despite favorable R&D results and proposals to install at wwtp's further ABRs in larger scale. After 2005-6 further ABR-developments ceased, I am wondering why?


...It was observed that the soluble BOD fraction of the ABR effluent increased when compared to the primary tank effluent soluble BOD, an observation that had not been made in previous ABR studies in the UK....

To my surprise, Methan emissions been not considered at all during 2001! 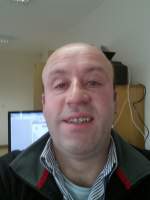 11 Nov 2014 13:59 #10936 by kelldigest
Does the treated effluent from an ABR contain a lot of ammonia? I would think that this could be a major issue as effluent from an anaerobic digester is high in ammonia. This places a huge energy demand on subsequent activated sludge process to remove this ammonia
You need to login to reply
Less

Yes, there is ammonia in the effluent from ABRs (anaerobic baffled reactors). But they are not normally connected to activated sludge plants, rather to a constructed wetland or to reuse activities.

I think you will find this thread interesting where we discussed ammonia in the effluent from ABRs:
forum.susana.org/forum/categories/35-bio...sed-treatment-plants

(any particular reason why you ask? Welcome to the forum!)

I work in the wastewater industry in Ireland and have operated WWTP and AD Plant from 10 to 80,000 p.e in size.*

Our systems are very energy hungry and I would like to promote low energy treatment systems.

ABR looks like a good option but for larger scale operations you would need a low energy way of removing ammonia. For discharges to water courses, ammonia is often the limiting nutrient in discharge licences.

I will post some thoughts on the thread you suggested.
This forum is new to me and I find it exciting to have people to share ideas with.