Interesting... please help me understand how this works in some Indian cities. You wrote:

And if not all houses can have a composter, they could carry it to  a community level composter installed in the community garden.

How do I have to imagine such a community garden? Is that a common thing? Amongst a grouping of multi-storey apartment buildings there are community gardens, or are you referring more to areas with one-household dwellings?

How far do you think it could be expected for people to walk with their organic kitchen waste to a communal facility? I can't imagine that people would be willing to walk further than their drive way... That's how the system worked in Germany where I lived: we had a brown bin for kitchen and garden waste which was collected by the municipality (or their contracted service providers) once per week, and taken to a composting facility operated by a company for the municipality.

Re: Safety of sanitation workers during covid pandemic should not be overlooked (India)

12 Jun 2020 19:23 #30065 by paresh
Dear Elisabeth,
You are right, community gardens are not a very common phenomenon, especially in small towns and cities. In Alleppey, where this system is functioning well (still a work in progress), the local government has constructed small sheds along the streets. (see pictures below, I don't have a picture from outside right now) These sheds called WatSan Parks locally house one or numerous aerobic composting bins and also collect inorganic waste. Collectors are stationed at each unit for fixed hours when people can deposit their waste. 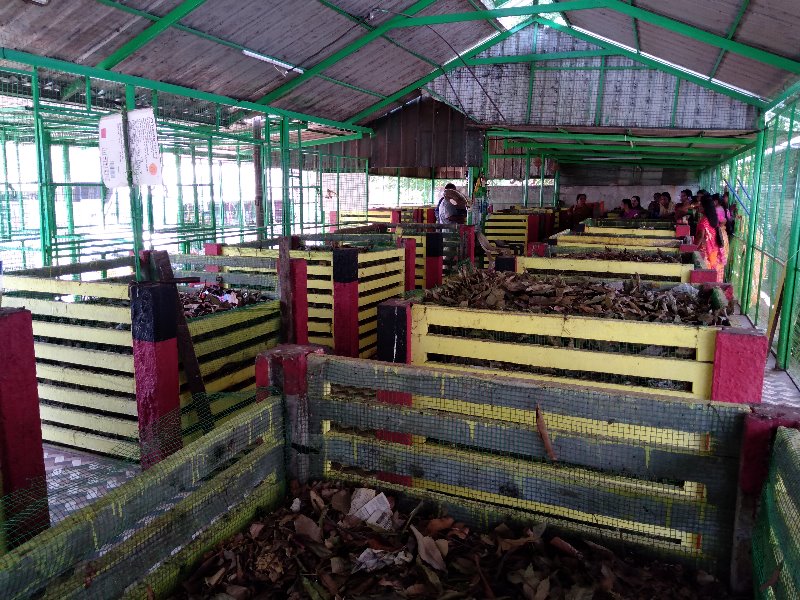 The organic waste is composted using these aerobic bins. 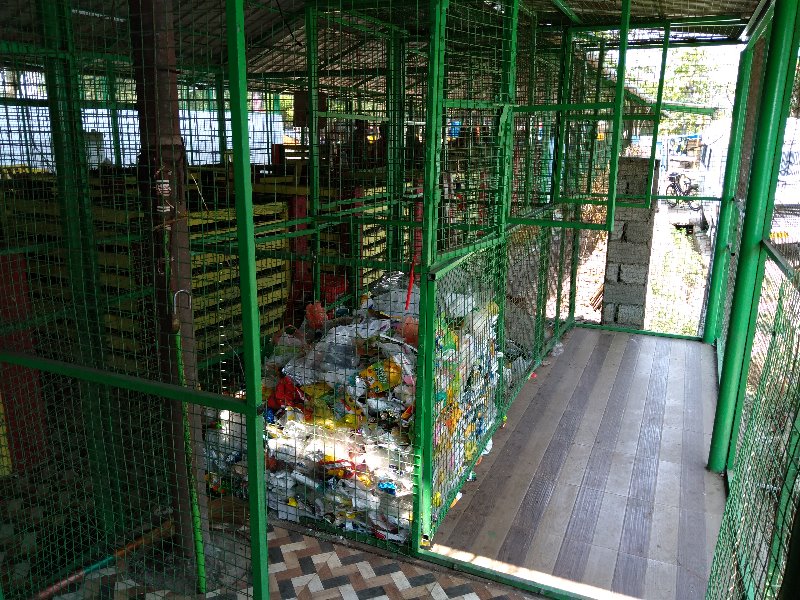 The inorganic waste collection happens right at the door

Before initiating these community level units, household level composting units were made available at subsidised rates . The  homestead type of development allows installation of such units within most plots.  There are hardly ay multi-storey buildings in the town.

The local government was in a sense forced to take decentralised route. Sometime in 2012 or 13, the town was forced to stop use of its dumping site in neighbouring village due to public protests. (Dumping of unsegregated waste used to be the norm in most towns and cities and it has not changed in many places). This story has been documented by CSE in their publication titled "Not in My Backyard"

I don't have an answer to how long should it be expected for people to walk to deposit their organic waste daily. While designing public transport systems, they assume that a  stop should be within reach of 5 minute walk which translates to approximately 250 m. For depositing waste however, people need not take that walk deliberately, they can do so on their way to work or other activity.

Also curious (I am novice about these aspects). How does once a week collection of organic waste work regarding smell? Is it low temperatures or low density or both that allow it to be inoffensive? If it is low temperature that allows collection once a week, would the frequency be same during the summers? I can't imagine that working well in India where it starts to smell in a matter of a day.

As Mr. Paresh mentioned these decentralized compositing units are not so common .. But this “thumboormozhi model composting units are successfully working at some municipalities in Kerala, India.
I took these pictures from Guruvayoor Municipality , Near my home town at Thrissur Kerala during the year 2018. 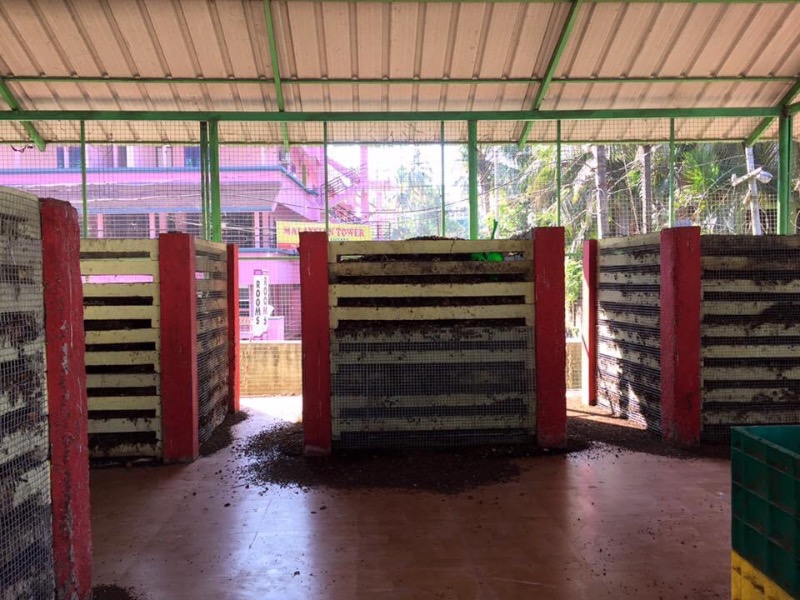 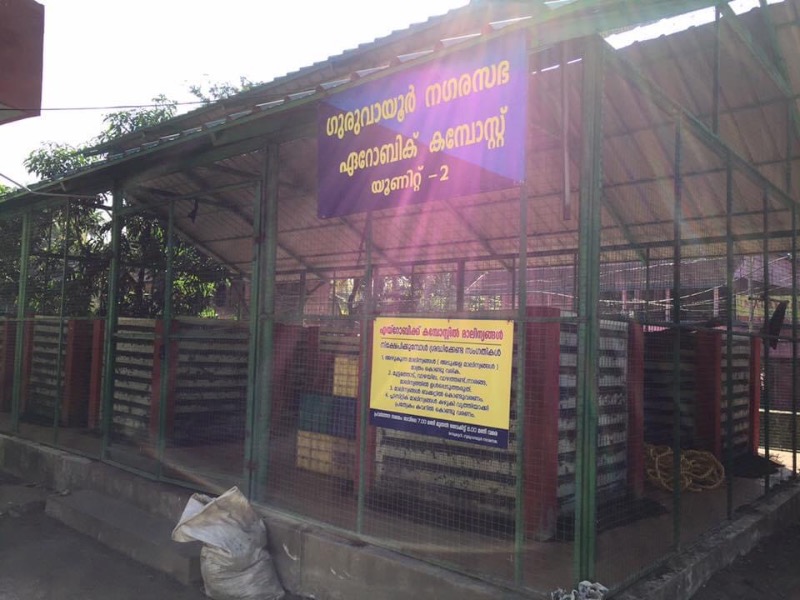 since there is no door to door collection is available due to the lack of a centralized treatment facility like in Germany or many developed countries , the citizens are willing to take their household waste to these community based initiatives.

During my masters thesis studies in Germany , I could analyse that the organic household  waste in Germany contained less water content  comparing to Indian household organic waste . The organic bin also contains the garden waste from a house..ofcourse the temperature also plays a big role in degradation.
In Germany even in summer the whole week may not be of kerala’s Temperature around 36 degree Celsius
I could also visit a centralized compost plant in Germany which  was located far away from housing area.

I am curious about your study comparing characteristics of organic domestic waste in Germany with that of India. It would be great if you could post the study or a brief summary here.

Paresh Chhajed-Picha
Researcher at Indian Institute of Technology - Bombay, India
This email address is being protected from spambots. You need JavaScript enabled to view it. Twitter: @Sparsh85
Wikipedia: Sparsh85

My masters thesis study during 2015 was based on the impact of inocula selection for digestor gas recovery potential. We used different inoculum in combination with different substrates that were locally available in Germany. Our main focus was to analyse the impact of inoculum but due to our curiosity the two substrates that we had chosen was Indian kitchen waste collected from Indians and German kitchen waste from Germans.

From the visual appearance itself we felt Indian kitchen waste degrade fast comparing to German .  Few reasons were the Indian kitchen waste mainly composed of cooked rice , pulses vegetables and very rarely meat which is easily degradable in shorter time since majority is cooked. On the other hand, German kitchen waste mainly composed of fresh green salads , meat , coffee filters etc and very less quantity of cooked food . Therefore the process of degradation a bit slower and less quantity of biogas production at the early days. But  biogas production lasted for longer days.

21 Jul 2020 13:55 #30306 by paresh
That is an interesting observation about characteristics of waste Thulasi. It would be great if you could share your research report or a link  for the benefit of others. It will also hopefully attract some citations.

I am just curious if you collected waste from Indian households in Germany or India? Also which part of India? I ask specifically because of your observation rare presence of meat in waste from Indian households. Though compared to Germany, share of people who have vegetarian diet is high in India (31-33% according to wikipedia), two third of India's population consumes meat.

Thank you so much for your interest in our research. Unfortunately we do not have any detailed comparison studies in a Sharable format that our main focus was on impact of inocula selection. But it was great to know from you that this would be a good idea that I may be also interested to do In future  .
Its was from my primary observation of two waste substrates , I was able to mention the substances contained in both kitchen waste .  About the degradation rate, a mixed collection bin of garden waste and kitchen waste also has slow degradation rate that required only weekly transportation to the compost plant.
We collected both the German and Indian kitchen waste from my friends who are residing in Germany.
Thank you for your interest

02 Sep 2021 22:01 #32704 by HAPitot
Dear Paresh, dear Tulasi,
Some question that I would have about these composting units:  Are they working using worms?  And what is the material used to make the horizontal planks?
Thanking you in anticipation!
Hanns-Andre Pitot
M.Eng. Environmental Pollution Control
presently in Seesen, Germany
You need to login to reply
Less

Thank you for your question and I really apologise for my very late reply that I missed to follow  the conversation.

From the literature search and  during my visit to such facility, I get to know that the horizontal planks  was prefabricated concrete slabs. The technical manual suggest that the  composting was done with the help of inoculum produced out of isolated micro organisms from cow dung. I guess this (Thumboormuzhi model) was developed by Kerala Agricultural University, Kerala, India . Please find the attached file for technical manual for the minor details.

Thank you for your interest .

The following user(s) like this post: HAPitot, paresh
You need to login to reply
Page selection:
Share this thread:
Copy URL
Recently active users. Who else has been active?
Time to create page: 0.619 seconds
Powered by Kunena Forum