We, the GIZ Sanitation for Millions team, would like to invite you to our upcoming bilingual webinar:
Solid Problem, real solutions? How to handle non-organic waste in pit latrines

For more information and to register for the English channel, click here: www.susana.org/en/webinar-registration-11-march-2020

We look forward to your participation! 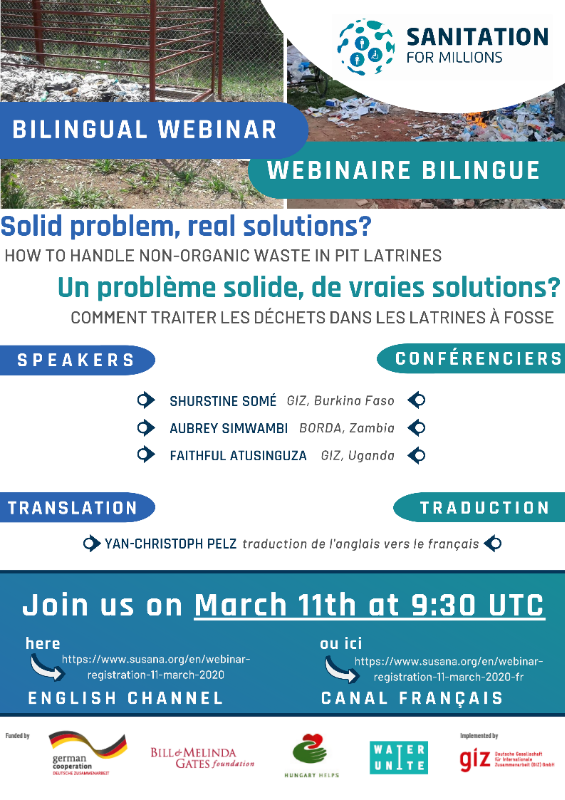 This thread is designated to allow discussion of the following questions, which arose during the webinar:
1) What are your thoughts on the Flexcavator? How does this technology affect emptying?
2) Are pit emptiers in Zambia and Burkina Faso also charging an extra fee for solid waste found in pit latrines?
3) What role do you see in MWDSEP in enforcing solid waste management? FSM is strictly outlined in Zambia’s Sanitation strategies and policies - so what is missing?

Please feel free to add any further questions and to join the discussion!

The presentations and recordings of the webinar can be found here:
https://www.susana.org/en/knowledge-hub/resources-and-publications/library/details/3815

The case study, which was mentioned in Aubrey’s Lusaka presentation can also be found in the library:
https://www.susana.org/en/knowledge-hub/resources-and-publications/library/details/3826 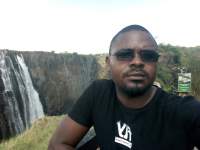 Here is my little input for Lusaka on the asked questions:

1)What are your thoughts on the Flexcavator? How does this technology affect emptying?

The flexcrevator is a good innovation but it is limited on how dense the solid waste in the pit latrine is. It is like for any machine that when it is overloaded some components will fail and once they fail on the site the job will not be done.
It is in this regard that if the solid waste is too much in the pit latrine some of it will need to be fished out with hooks before sludge emptying can commence. Fishing is very time consuming and in my experience the pit emptiers very much dislike it. I had a very little conversation with the innovation leader Francis in cape town during the FSM5 and he mentioned that if resources allow he would very much like to come back to Lusaka to test the machine again and see if new incorporations can overcome the challenges he faced trhe last time he was in Lusaka.

The use of the flexcrevator on pit empting would enlighten households that the waste thrown in the pits will remain with them.

2) Are pit emptiers in Zambia and Burkina Faso also charging an extra fee for solid waste found in pit latrines?

3) What role do you see in MWDSEP in enforcing solid waste management? FSM is strictly outlined in Zambia’s Sanitation strategies and policies - so what is missing?

MWDSEP in Zambia working together with environmental and local government agencies and authorities as well as NGO's are developing OSS and FSM code of practice and statutory instruments that will guide on the operations and maintenance of OSS facilities. These laws will guide also guide on penalties for solid waste found in pit latrines and how materials from faecal sludge treatment processes should be used.

The much missing enforcement mechanisms on OSS and FSM will be enhanced once these laws are put in place.

Lusaka city council is also in the process of establishing a solid waste management utility which will enhance solid waste collection and management capacities in the city and with these we believe the practice of solid waste disposal in pits will be reduced. The ministries ( MWDSEP and MLG) are currently working on legislative modalities for this utility to come through as soon as possible. The municipality has also floated an EOI for community based organisation to tender in and register their organisations for solid waste collection in zones of their operations.

Thanks,
Aubrey
You need to login to reply
Less

It is interesting to see how the webinar addressed the two main issues surrounding Solid Waste Management in relation to pit-emptying. i.e technology and enforcement. It is also great to see Aubrey's contribution to this discussion. Might I add, that The Flexcrevator was tested within pits in Lusaka during a pit-emptying technology rapid testing mission in late 2017, to access its suitability for the pit conditions in Lusaka. You can read more about the outcomes of the testing within this thread:  https://forum.susana.org/99-faecal-sludge-transport-including-emptying-of-pits-and-septic-tanks/22131-improved-pit-emptying-technology-flexcrevator
PHOTO EXTRACTS: 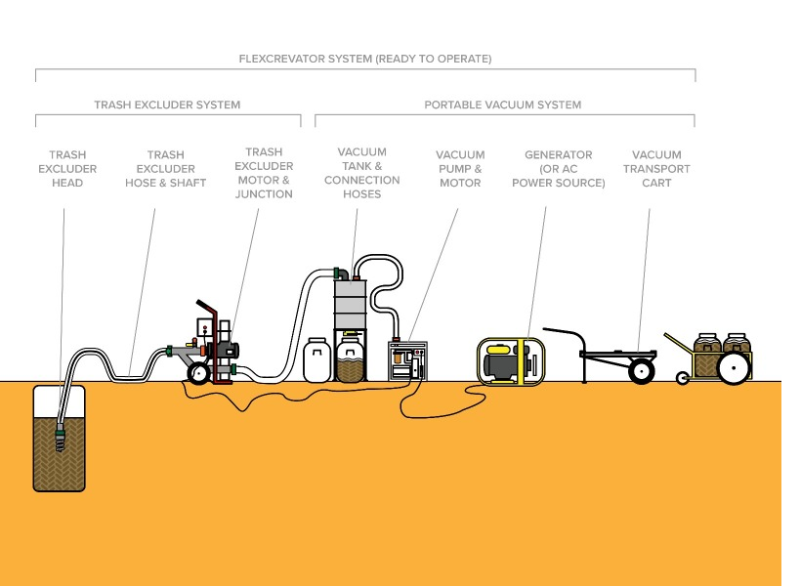 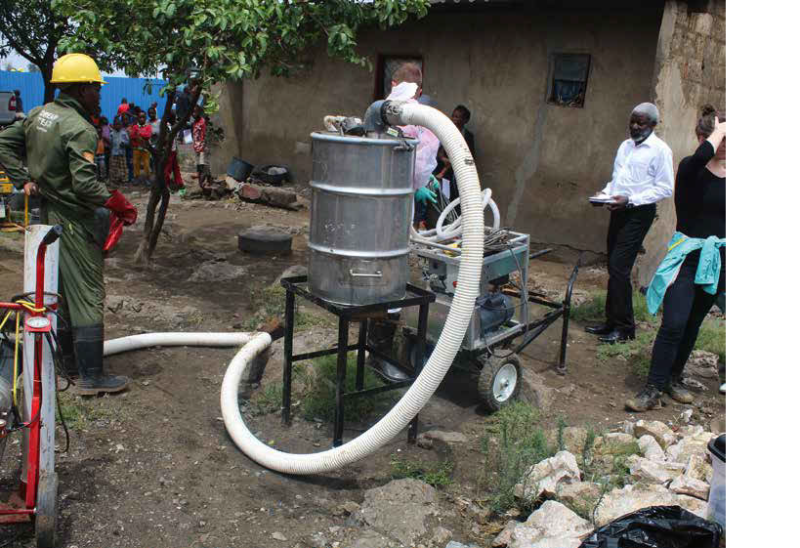 The Flexcravator (produced by North Carolina State University), is described by its manufacturers as a technology that surpasses manual emptying by enabling fast, safe, and hygienic fecal sludge removal. The machine has two parts that are the  Portable Vacuum System that pumps sludge from the pit and into storage barrels. The Trash Excluder (previously known as the Flex X) uses a unique, rotating head that prevents trash from entering the machine. The result is smooth, trash-free sludge ready to be transported off-site for safe disposal. The Excluder also connects to a vacuum truck, allowing trucks to empty pits that were previously off-limits due to trash.

A major problem of pit-emptying in Lusaka is the high content of solid waste in the pits which obstructs every mechanized emptying, no matter whether manual or motorized including the Flexcravator as evidenced during the Lusaka testing mission. The problem is not in solid waste like brooms, bottles, tins, shoes, bones which are easily rejected by the exclusion system (auger) at the suction pipe inlet of the Flexcravator, but the enormous quantity of plastic bags and cloth, which get entangled within the auger. The only way to remedy the situation is to pull out and clean off the plastic/ cloth which inevitably leads to spillage of Faecal Sludge on site.

I am however aware that several versions of the technology have been produced since the Lusaka tests and I would personally like to know if these have improved the performance on the technology in handling waste...

22 Jul 2020 23:19 #30328 by jocetsai
Thanks so much for bringing up the Flexcrevator. Here at NC State we've madea number of improvements since our work in Zambia and tested it in Kenya, Rwanda and Madagascar since our work in Zambia to help us handle plastic bags and cloth. We also have made modifications to the end of the auger to improve performance. A large number of the major updates are captured in our FSM5 presentation. See this video of the device in a simulated pit for ease in viewing to see it in action. As you can see the auger keeps the trash in the pit during operations.  We have also made improvements since 2019 (see Marketing Materials and FSM Presentation for performance and system specs). We are also incorporating efficient fluidization processes to allow the Flexcrevator and Excluder to handle thicker sludges.  We are confident though that our improvements in processes and hardware will be able to address the types of pits we’ve seen in Lusaka. We’re currently preparing for field and market testing in Ghana and look forward to sharing our successes.

As Aubrey pointed though, there are limits to what machines in general can handle especially in pit latrines with very high amounts of trash with low amounts liquid sludge that is un-pumpable. For instance, in Rwanda a lot of the pits are very deep (some up to 6-8 meters deep) and have never been emptied. We’ve learned that in such conditions fishing prior to emptying is still the most efficient method of pit emptying. These pits seem to be the exception rather than the rule in our field work outside of Rwanda though.

You need to login to reply
Share this thread:
Copy URL
Recently active users. Who else has been active?
Time to create page: 0.750 seconds
Powered by Kunena Forum