Do we know that climate change will affect developing countries more than developed countries? Good references for this?

Do we know that climate change will affect developing countries more than developed countries? Good references for this?

01 Apr 2018 16:48 #24604 by Elisabeth
I have heard it many times before and it makes a lot of sense to me:
Climate change will affect developing countries more than developed countries; often because their current climate is already a rather "difficult" one, e.g. very hot, high dependence on rain-fed agriculture; little resilience in their infrastructure; and of course for many small Pacific island states: low altitude, close to sea level.

My question to you today: What reference would you recommend to substantiate such a statement?

I ask because I want to include something along those lines in the Wikipedia article on global warming:
en.wikipedia.org/wiki/Global_warming

Second aside: I have recently added a fair bit of content to the Wikipedia article on developing countries, e.g. making the connection with sanitation issues and SDG6:
en.wikipedia.org/wiki/Developing_country

It needs a lot of further work. Join me if you care about educating the public about developing countries! It is linked to from many other Wikipedia articles and gets about 2000 views per day.

Regards,
Elisabeth
Dr. Elisabeth von Muench
Independent consultant located in Ulm, Germany
This email address is being protected from spambots. You need JavaScript enabled to view it.
Twitter: @EvMuench
Founder of WikiProject Sanitation: en.wikipedia.org/wiki/Wikipedia:WikiProject_Sanitation
My Wikipedia user profile: en.wikipedia.org/wiki/User:EMsmile
The following user(s) like this post: fppirco
You need to login to reply
Less 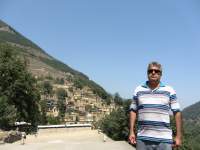 Climate change is very critical issue which shows itself in South Asia and Middle East, where my country Iran is located . Unprecedented increasing temperature (1.5 Celsius) this new year in comparison with last years in spring is an indication of climate change . Declining raining and long term water scarcity (about 2 decades) are all critical climate change consequences which are arising rapidly and will impact on all ecosystem, environment, biodiversity and economic issues as well as social issues and certainly its impact will be more sever in countries with transition economy.

Mohammad Mojtabaei
www.fppir.com/
Researcher and consultant
You need to login to reply
Less

Meet the Human Faces of Climate Migration
People move for many reasons – economic, social, and political. Now, climate change has emerged as a major driver of migration, propelling increasing numbers of people to move from vulnerable to more viable areas of their countries to build new lives.

read more in below link:
www.worldbank.org/en/news/feature/2018/0..._TT_worldbank_EN_EXT

23 Apr 2018 16:29 #24852 by arno
The mismatch between the countries that cause climate change and those that have the most difficulty to adapt to global change is striking. This is illustrated here where the red tones are the "free riders" and the green tones are the "forced riders" also with high vulnerability. 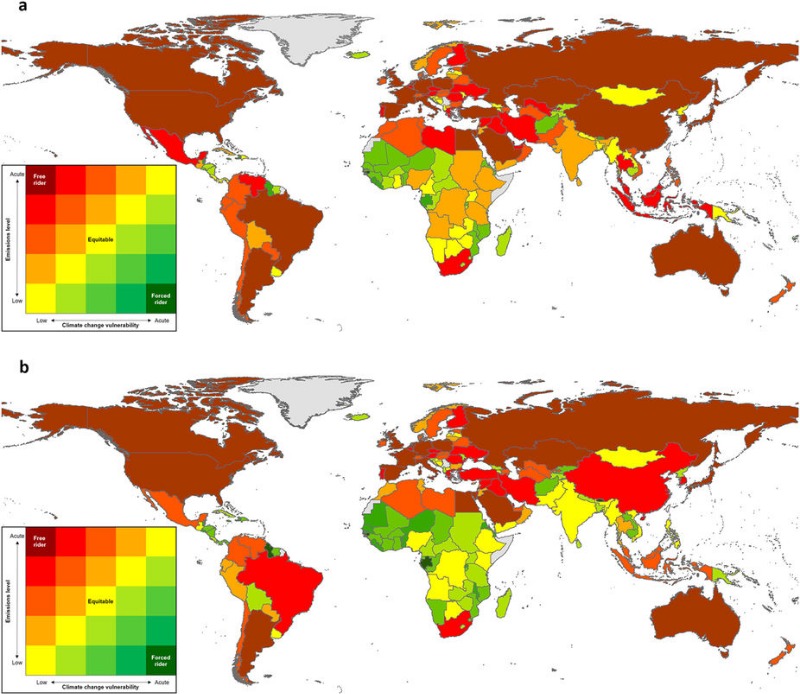 Mohammad, I have included content about migration from the Worldbank publication that you had mentioned (nice to see it's an open access one).

Arno, the publication that you had recommended was very interesting (and also open access which is great). I ended up contacting the main author, Glenn Althor, and he kindly helped me with revising the section that I have now included in the Wikipedia article.

I think I have managed to explain why developing countries will suffer more from climate change effects than most wealthier countries in the Wikipedia article (this is called "high climate vulnerability").

So the Wikipedia article on developing countries - which I have been working on for a while - now has a decent section about global warming * within the heading of "Common challenges", see here:
en.wikipedia.org/wiki/Developing_country#Global_warming

The work is not yet finished. These are my open questions:
• Are there any additional pertinent references that I should quote?
• I was puzzled that the last Climate Vulnerability Monitor report seems to be from 2012 or did I not look properly?
• Are there any key terms that I should still introduce (and link to other existing Wikipedia articles)?
• Can you think of ways to make the sentences easier to understand for laypersons? The readability score is quite low.

I hope to hear from anyone who knows a bit about this topic. You could edit the Wikipedia article directly, or copy the section into Word and then use track changes to show me what needs changing.

P.S. I copy here the new text how it stands as of today (the hyperlinks did not copy across properly, but there are plenty of hyperlinks to related Wikipedia articles in the live version):

The effects of global warming such as extreme weather events, droughts, floods, biodiversity loss, disease and sea level rise are dangerous for humans and the environment.[66] Developing countries are the least able to adapt to climate change (and are therefore called "highly climate vulnerable") due to their relatively low levels of wealth, technology, education, infrastructure and access to resources. This applies to many countries in Sub-Saharan Africa or Small Island Developing States. Some of those island states are likely to face total inundation.[67] Fragile states or failed states like Afghanistan, Haiti, Myanmar, Sierra Leone, and Somalia are among the worst affected.

A changing climate also results in economic burdens. The economies in Least Developed Countries have lost an average of 7% of their gross domestic product for the year 2010, mainly due to reduced labor productivity.[68]:14 Rising sea levels cost 1% of GDP to the least developed countries in 2010 – 4% in the Pacific – with 65 billion dollars annually lost from the world economy.[66] Another example is the impact on fisheries: approximately 40 countries are acutely vulnerable to the impact of greenhouse gas emissions on fisheries. Developing countries with large fisheries sectors are particularly affected.[68]:279

In many cases, developing countries produce only small quantities of greenhouse gas emissions per capita but are very vulnerable to the negative effects of global warming.[67] Such countries include Comoros, The Gambia, Guinea-Bissau, São Tomé and Príncipe, Solomon Islands and Vanuatu - they have been called "forced riders" as opposed to the "free riders".[4] Internationally there is recognition of this issue, which is known under the term "climate justice". It has been a key topic at the United Nations Climate Change Conferences (COP).

During the Cancún COP16 in 2010, donor countries promised an annual $100 billion by 2020 through the Green Climate Fund for developing countries to adapt to climate change. However, concrete pledges by developed countries have not been forthcoming.[69][70] Emmanuel Macron (President of France) said at the 2017 United Nations Climate Change Conference in Bonn (COP 23): "Climate change adds further injustice to an already unfair world".[71]

Climate stress is likely to add to existing migration patterns in developing countries and beyond but is not expected to generate entirely new flows of people.[72]:110 A report by World Bank in 2018 estimated that around 143 million people in three regions (Sub-Saharan Africa, South Asia, and Latin America) could be forced to move within their own countries to escape the slow-onset impacts of climate change. They will migrate from less viable areas with lower water availability and crop productivity and from areas affected by rising sea level and storm surges.[73]

Economic development and climate are inextricably linked, particularly around poverty, gender equality, and energy.[74] Tackling climate change will only be possible if the Sustainable Development Goals (SDGs) are met (goal number 13 is on climate action).[74]

* In the Wikipedia suite of articles on this topic, they have chosen to use "global warming" for the man-made climate change. There is another article on climate change which is about non man-made climate change: en.wikipedia.org/wiki/Climate_change (it took me a little while to get my head around it)
Dr. Elisabeth von Muench
Independent consultant located in Ulm, Germany
This email address is being protected from spambots. You need JavaScript enabled to view it.
Twitter: @EvMuench
Founder of WikiProject Sanitation: en.wikipedia.org/wiki/Wikipedia:WikiProject_Sanitation
My Wikipedia user profile: en.wikipedia.org/wiki/User:EMsmile
You need to login to reply
Page selection:
Share this thread:
Copy URL
Recently active users. Who else has been active?
Time to create page: 0.366 seconds
Powered by Kunena Forum