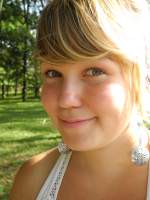 04 Jan 2012 14:38 #813 by kirsikkapynnonen
Hello all! I’m a Finnish master’s degree student and currently doing a project for my thesis here in Kenya, about ecological sanitation. Just wanted to post some updates from the field from Nyanza and Western provinces in Kenya, in case someone is interested (: Here you go:

Last month UDDTs in rural schools (of Ecosan Promotion Project, EPP) were monitored and post-evaluated in Nyanza and Western provinces in Kenya (by Finnish master student and GIZ consultants). The purpose of this project was to monitor how these selected schools have managed with operation and maintenance of their ecosan toilets this far. The selected schools were actually chosen according to their good performance with O&M and the goal was to find out the reasons for the good practice. As known, one of the major challenges considering ecological sanitation is to create a sustainable operation and maintenance mechanism. How to succeed with that in schools, were challenges are e.g. the high population of toilet users and small children?

In Nyanza province altogether five schools were visited, four of them sponsored by GIZ and Ecosan promotion project: Kendu Muslim Secondary School, Kachan Primary School, Siany Mixed Secondary School and Radienia Primary School. One of the schools, Hope and Kindness, was self sponsored. All the schools were managing relatively well with their operation and maintenance. Toilets were correctly used by pupils and teachers, clean, there was no smell or flies and storing facilities were functioning. Urine and also dried and stored compost was utilized in the school farms! I was happy to see how people were dealing with ecological sanitation with a very positive attitude and they consider it as a very important issue. Interviewed students were pleased to use UDDTs, as they are clean and not smelly. Idea of reusing urea and compost from the toilets as a fertilizer in the school gardens or farms was well accepted. All the pupils I talked with knew the benefits of this natural fertilizer and had accepted the reuse.

In Western province schools were already closing for the Christmas holidays, so we managed to visit only some of them. Eldoret Educational Center was a very good example of well operating and maintaining schools! But unfortunately we also got an example of the opposite performane: in Kitale Ndogo Primary school the maintenance of UDDTs seemed to be entirely neglected, and the condition of the facilities was terrible. Unfortunately the head of the school was not around, so reasons for this bad performance could not be figured out. Field observations and interviews in Western province will be continued next week, and also Kitale Ndogo Primary will be visited again.

Ecological sanitation was generally accepted very well in these schools and also in the communities around. Some of the schools had built more UDDTs after the EPP, and communities around were involved – which is one important factor. The schools are spreading the ”gospel of ecosans” (as one head teacher put it) and some schools get visitors who just want to see and learn about ecological sanitation. Pupils would prefer this kind of toilets also in their home communities, and for sure are spreading the idea to their parents and relatives.

P.S. See also the Kenya Ecosan Blog for more information about the EPP and these school UDDTs: ecosankenya.blogspot.com/ 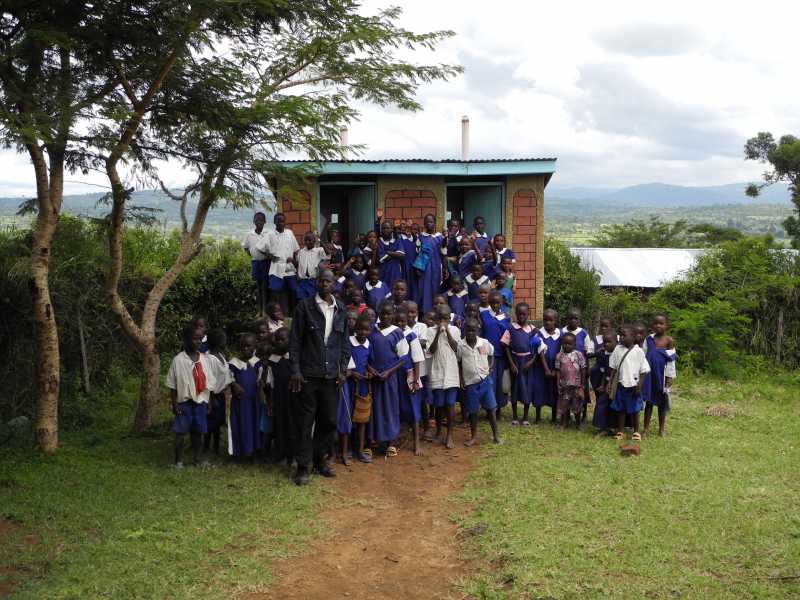 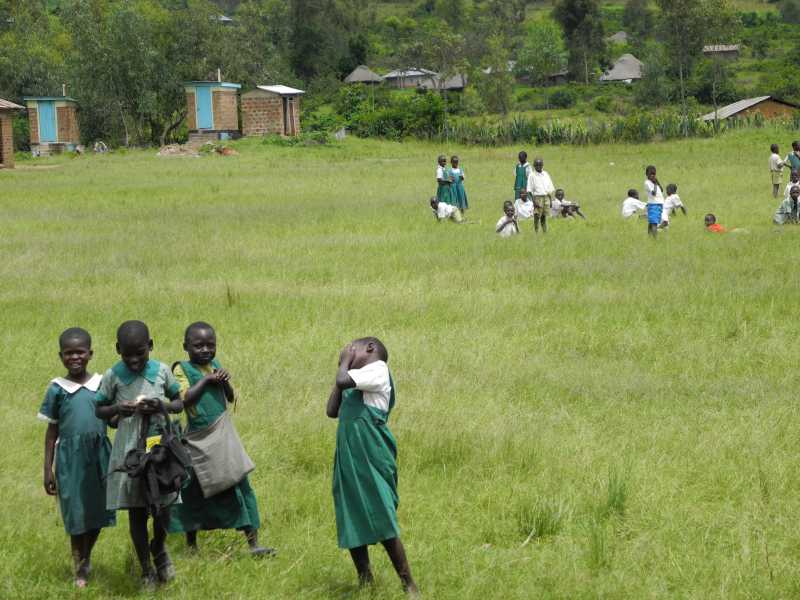 Thanks for this update and information about these UDDTs in rural schools in Western Kenya. It is encouraging to hear some good news with regards to longer-term maintenance of UDDT school toilets!

You mentioned that the best performing schools are using the fertiliser from the UDDTs. The question in my mind is whether this is actually a coincidence or instead a reason for the continued, enthousiastic use of the UDDTs.

In other words: Out of the 73 schools with UDDTs, are only those schools carrying on with their UDDTs who use the fertiliser? If you could prove this, this would be interesting. I would be surprised though, as I would have thought the amount of fertiliser produced from just 4 UDDTs per school is rather small and insignificant and thus this could not possibly be a major driver. Meaning that the well performing schools would perform well in any case, whether they use the fertiliser or not.

What is your feeling on this and what do the other Kenyan consultants (Moses, Wycliffe, others) think?

Good luck with the rest of your data collection!

If anyone is curious about these schools, please have a look at our SuSanA case study on this project which was recently updated (and which Kirsikka will help to update further):

11 Jan 2012 10:00 #884 by kirsikkapynnonen
I have been visiting and evaluating UDDTs in rural schools in Western Kenya during the last months, and according to my observations the most motivated and engaged schools (who continued with their UDDTs) were all using the UDDT products on their school farms (or for tree planting). Wondering if this is one highly important factor that motivates the schools to take care (operate and maintain) of their UDDTs? Does someone has similar or different experiences? I would be very happy about shared experiences here! 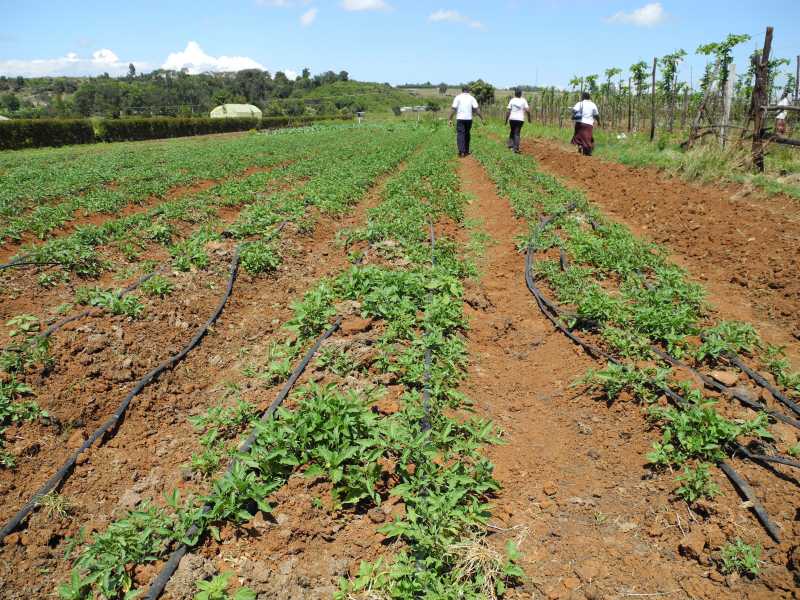 12 Jan 2012 11:45 #886 by kirsikkapynnonen
Thank you Elisabeth for your comments! It is very true that my research is covering only a small part of the total amount of the schools in the Ecosan promotion project. But still, in those schools I visited, it seemed to be an important factor for motivation to maintain the UDDTs.

I doubt that only the schools that reuse the products as fertilizer are doing well. But reusing the urine and dried faeces is certainly indicating that the concept of ecological sanitation has been accepted. And actually, even there are only 4 UDDTs in each school (some had constructed more though) the amount of urine is quite a lot. For example in Eldoret Educational Centre, the small school of 180 pupils had 4 UDDTs and urinals for boys (no pit latrines in use), but urine containers (volume 20 litres) are filled up every day! In Khaimba Primary School, which is a big school (900 pupils) and where only the top classes (7 and 8 ) use the UDDTs, urine containers fill up once in four days. Hence, even few toilets, the amount of urine is enough for actual utilizing on the school farms.

Interesting fact learned in Khaimba was that compost from UDDTs is actually very valued product, as it has been stolen from the vaults!
The following user(s) like this post: ecosanityservices
You need to login to reply
Less

18 Jan 2012 02:58 #905 by canaday
This is very interesting. Are these drip irrigation hoses? What plant is this? How much water is mixed in?
Thanks for such good news. 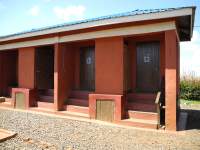 23 Jan 2012 13:14 #949 by ecosanityservices
Dear Chris.
This is drip irrigation system used to irrigate traditional vegetable for school consumption and local market. They don't use any other fertilizer apart from the urine from the ecosan toilets.
You need to login to reply
Less

10 Feb 2012 11:44 #1033 by kirsikkapynnonen
Do you remember what was the mixing ratio of urine and water in this school?
You need to login to reply
Less

13 Feb 2012 21:48 #1049 by nazir
I would like to know where would the best possible place to source UDDTs be. Would you be able to furnish me with few suppliers details please.

Nazir.
You need to login to reply
Less

14 Feb 2012 06:22 #1052 by ecosanityservices
Dear Krissirka.
The mixing ratio for urine and water is 1 to 1. This is mostly done during dry seasons when concentrated urine can scourge the plants or crops being fertilized. Concentrated urine can be used during rain season.
You need to login to reply
Less

14 Feb 2012 07:24 #1053 by ecosanityservices
We are the guys supplying the plastic squating pans for ecosan toilets.
Contact Moses Wakala on +254721743171 email This email address is being protected from spambots. You need JavaScript enabled to view it. We shall deliver where you want them delivered here in Kenya.
Thanks.

19 Feb 2012 07:20 #1081 by kirsikkapynnonen
Dear Moses,
what do you mean with concentrated urine? Pure urine? Mixing ratio 1:1 already sounds quite strong especially during the dry season, doesn't it..?
You need to login to reply
Less

19 Feb 2012 08:01 #1082 by kirsikkapynnonen
Hello!
Some weeks ago we visited few household UDDTs (built during Ecosan Promotion Project) in Western Province, Kenya. Toilets were very clean and well maintained. Of course it's a lot easier to operate and maintain toilets at individual level, compared to bigger units and institutions e.g. schools, but well managed household UDDTs are a very good thing in communities for absorbing and spreading the principles of ecological sanitation and especially reuse of ecosan products. Owners were pleased with their UDDTs and reused urine as fertilizer in agriculture. 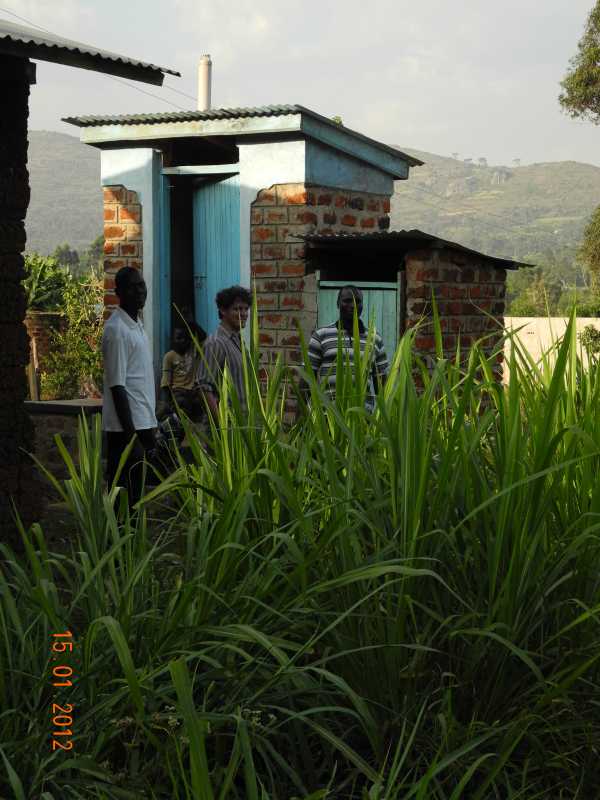 [Household UDDT in Chwele, Western Kenya. In the front a farm where urine-water mixture is utilized with good results.]

You need to login to reply
Share this thread:
Recently active users. Who else has been active?
Time to create page: 0.805 seconds
Powered by Kunena Forum