as I am new at SusanA, let me just introduce myself (and straightaway ask some questions

my name is Peter Gloede; I'm a (meanwhile retired) teacher at Kepler-Gymnasium (Grammar School) in Pforzheim, Germany, but I still organize our partnership with an NGO called "Schulbausteine für Gando" (Bricks for a School in Gando) which was initiated by Francis Kéré, a native from Gando and now architect in Berlin - see www.fuergando.de .

Two years ago I travelled to Gando with some students, and we brought some solar lamps and assembled some of them in the village with the local people. Thus our project "Light for Gando" was born ( http://www.lichtfuergando.de - unfortunately only in German).

At the moment, however, there is more urgent need for financing the toilets of the secondary school (CEG) which is being built right now. This school - as all buildings built by Mr Kéré - is dedicated to ecologically efficient and sound architecture. Just last month Mr Kéré was awarded the Global Holcim Award Gold 2012 for the design of that school.

Having browsed through your website with so much information I find it hard to filter the essential points which would be relevant for us.
At the moment I've got two urgent questions:

a) Could anyone give me details about the cost of a school ecosan toilet project? Or: which of the fact sheets do you think comes closest to our needs (The school we need the toilets for caters for 1200 students, and/but my budget for the moment is about 20,000 €.

As I want to apply for a grant in that amount and have to hand in the details by the end of November, I would be very grateful if you could provide me with this information quite soon.

b) I have already contacted WSA in Burkina Faso, haven't got an answer yet. So I'd like to pose this question to you: do you think there is a chance that WSA (or somebody else, but who? hopefully you?) could build such toilets for us in Gando ; or that - even better - WSA could instruct the people in Gando how to build them?
(We've had some good experience in cooperating with "Solar Energy for West Africa" when we had the photovoltaic systems installed on the school buildings. They had the expertise - which we didn't. I would think the same positive results could be generated by a cooperation with WSA - spreading the knowledge and the idea of ecosan rather than experimenting on the idea on our own and thus endangering a positive outcome. We don't have the knowledge (yet), but a lot of people in the Gando community who are used to participating in the building of Francis' projects and would be eager to help in the building)

Peter
You need to login to reply
Less

School UDDTs: Yes, nice and can be successful, but not without issue. The biggest issue is the maintenance. How good is the school administration and will they have a dedicated care taker for the school toilets? If not, forget it...
What toilets do they use at the moment?

How far is Gando compared to other locations in Burkina Faso where UDDTs already exist which your partners could go and visit? There are e.g. household UDDTs in Ouagadougou but I don't know of any school UDDTs in Burkina Faso?

Have you tried to speak to GIZ in Burkina Faso (e.g. Desirée Nana, Sandrine Tapsopa)? Not that they could help you build it or finance it but they could perhaps help you with local contacts.

Try not to spend more than, say 200 Eur per cubicle. Ensure gender separation and don't use steep stairs.

Don't make the toilets too fancy otherwise you take away the chance that anyone will copy them in the future without external funding.

Construction manuals and drawings are also in the SuSanA library. See e.g:
Publications by Rotaria: www.susana.org/library?search=rotaria

And this technology review by Rieck et al:
www.susana.org/lang-en/library?view=ccbktypeitem&type=2&id=874

And this one on sustainable school sanitation in general:
www.susana.org/lang-en/library?view=ccbktypeitem&type=2&id=1188

I could imagine that WSA could be a good NGO to work with on this topic (ask them about their experiences with school UDDTs). They certainly have ample experience with household UDDTs and ecosan/reuse.

But let me just stress again that the construction is the "easy part". It is the maintenance and long-term operation that you must worry about. How many years do you intend to accompany this project for? At least for 5 years, I hope.

I wish you good luck and please feel free to use this forum to obtain more input and to let us know how you progress!

thank you very much for your informative mail, especially the warnings and good advice.

I will try and answer to it bit by bit:
- how good is the school administration: I hop egood enough to keep up the maintenance. There are some dedicated teachers who appreciate working in such an ecologically aware school. And then there is FRancis and his family, who always keep an eye on school affairs.
- how far is Gando ..: very far, it seems. The only ecosans in Burkina I know of are those in Ouaga you mentioned.
- I've contacted Desiree and meanwhile am in touch with her
- I have already read the case studies. That's why I think it would be a good idea to introduce ecosans in the new school in Gando. The old (= elementary) school just has 6or 8 pit latrines very unwelcome and dark, no separation for boys and girls, no handwashing facility - and I haven't ever seen anyone use it. With an ecosan - and the respective hygiene education!! - I hope I can change this. I also put my hope in the fact that people will see an advantage in using the toilet, i.e. generating humus to improve their agricultural output. Why should they use a stinking latrine insted of the open field if there is no obvious advantage.

- The great - immediate - problems I have at the moment are
a) an assessment of the cost. We haven't got the means to build on our own, so I have to apply for a subsidy, and the only organization I can at the moment think of with a 90% chance of getting thast extra money is SEZ - and they need the application by the end of November.
Do you - or does anyone else - know of another source of financing ecosan toilets?

b) a reliable construction plan - also for handing in at the SEZ. I've already browsed through what there is in constructionplans and I must say the plan for the secondary school in Nakuru appeals to me very much. That's why I've already contactd the people in Kenya to help me with their construction plan. But if anyone else has a schol construction lan - feel free to send it to me. Thank you very much in advance.

- not too fancy: Is 200 € per cubicle a reasonable price? That's just what I want to find out. On the one hand "not fancy" is also what I want. On the other hand it needs to be something attractive, soe place the children really accept and go to. My idea is using Francis Keres architecture with it: building with pressed clay bricks (as were his schools so far) and then putting on top an elevated metal roof that on the one hand protects the building in the rainy season and on the other hand lets enough air into the cubicles that children won't be afraid to use them.

- WSA: meanwhile I've also contacted them and got a reply. As far as I can see at the moment they will try and work together with us.

I now will have to browse through all the other links you gave me.
Thanks again very much for your suggestions,

Peter
You need to login to reply
Less 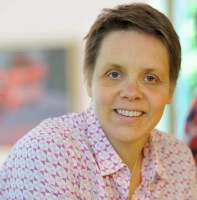 have you had a look at our brochure:
www.wecf.eu/download/2009/wecf_school_sanitation_english.pdf
you find a number of design criteria for school UDDT.

Planning a school UDDT requires a number of decisions having an impact on the costs: a) number of pupils per toilet, the WHO says 25 but I think one toilet for 50 or even more pupils can be enough.
b) Size of urine tanks depends on the urine management and use.
c) Double vault or single vault is not a very big difference in costs, we always recommend double vault for schools.

And in general the costs are difficult to estimate, as for any buildings it depends on the construction and labor costs.

The following user(s) like this post: secretariat
You need to login to reply
Recently active users. Who else has been active?
Time to create page: 0.292 seconds
Powered by Kunena Forum