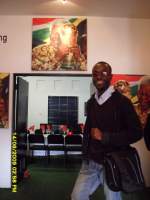 I am a PhD student at the Hong Kong University of Science and Technology
(HKUST) seeking information on the detail cost breakdown for the installation
and running of flush urine diversion toilets and waterless urinals, in an urban setting. Could you please assist me in that regard? Our group is working on the
treatment of source-separated urine.

Essentially I am doing the economic analysis of MAP production from source
separated urine (i.e. using flush UD toilets) for a dense residential unit
of ~ 1400 people as is common sight in HK. For that purpose, I have to
simulate the urine collection (possibly in the basement or can be decentralised), then the
phosphorus recovery, and cost all the individual components that are part
of the collection and treatment system. I relied on the Saniresch project
as a major source of information because it seems (from my literature
review) that it is the only project which has done similar work up to
date. I also used Etter et al. (2011) paper but that is based on dry UD
toilet.
Of course, the more information I can get, the better. Could you kindly
assist?

p.s. I came across your extensive review of UD toilets and wished to ask
you if I could obtain data on the running (costs and maintenance
requirements) of the EcoVac/Eco Flush toilets which I have selected for my
building mainly because of the vacuum unit and the very little quantity of
flush water that goes with the faeces. The price of the EcoVac is so high
that I had to assume that somehow, we could get it at a much much cheaper
price here in China depending on the size of the order (>350 units are
needed for my building). Do you think the EcoVac manufacturer can switch
the vacuum unit from faeces to urine upon order? the idea being to prevent
urine scaling within pipes. Hong Kong uses seawater for toilet flushing so urine
scaling in a pipe carrying urine (+little seawater) is, more than ever, likely to occur.

You have very interesting subject ongoing there and one key point would be to have all kind of economical studies about why urine should be source- separated and collected and what is the economical long-term benefit from UD toilets etc. I am currently really disappointed about the amount of data we have about this matter. How to get the economists to be more interested in these solutions in larger scale?
We have some limited financial information about costs in Finland in remote areas, but I do believe they do not apply in very many countries and are not proper studies, just collection of data. Also I am puzzled about the high price of low-flush options and also dry toilets. Perhaps economic incentive in Finland could help the price, e.g. by means of taxation but otherwise they are economically beneficial only in remote areas at the moment and not really in cities as the water is rather cheap commodity in Finland. Of course use of phosphorus and other nutrients from urine (and also the compost or sludge from toilet) can make the system more beneficial but legislation at the moment here makes it not possible to sell or even give the urine or any of the matter to anyone and you have to have garden of your own here.


Little bit related to your study I would like to let you and others know about an interesting study that has been conducted in Finland. Unfortunately the results and study are in Finnish and has not been translated.

In brief, this table we should keep in mind from economic and environmental point of view and no matter what kind of toilet solutions we use. We should remember to separate grey water from excreta (urine and feces) if possible (in UD's it is of course). THe grey coloured part in the picture called "Kuva 11. means the greywater and rest is the excreted matter both urine and feces mixed. From bottom of the row there are columns from left to right of
e.coli
Nitrogen
Phosphorus
total oxygen demand
oxygen demand of organic material
oxygen demand of ammonium

This is just curiosity to long-term economic savings but espeacially to environmental savings as we should realise in larger scale to start separating our greywater which is then rather easy to clean and is not that harmful to environment and water bodies as excreted materia. I hope in your type of studies and in general this would be taken into consideration as well in a way or another as it relates to all wastewater.


Anyhow, I was not able directly to help you, but in general waterless urinals are very good idea and especially if you flush with sea water. If you use properly working waterless urinals you can avoid totally the scaling of the urine to pipes! Perhaps they can have some data you could use?: www.ecoprod.co.uk/urimat_waterless_urinals

very good luck and looking forward to results of this study, we could encourage based on it to have something similar in Finland in the university.

Best regards
Aino-Maija, GDTF
www.drytoilet.org
Aino-Maija Kyykoski
This email address is being protected from spambots. You need JavaScript enabled to view it.
Finland
You need to login to reply
Less

Thank you so much for your reply which I only got to read today. I shall keep you updated.

I would like to pick up on something that you wrote here in your posts and to me by e-mail:


I am a PhD student simulating the production of struvite from dense settings such as in Hong Kong, using seawater for toilet flushing (SWTF) as a source of free of charge Mg for P recovery. SWTF has been practiced in Hong Kong since 1958.

It has occurred to me that elsewhere on the forum, the suggestion of using seawater for toilet flushing was made by Juergen Tuemmler:
forum.susana.org/forum/categories/139-in...anitation-myths#7756

Where water for flushing is lacking, one might look at the use of sea water for flushing and sewerage (many, if not most of mega-urban settlements are sited along the coasts) and appropriate purification connected before letting the residues going back into the sea.

I had written a reply to Juergen on the forum in the same thread on 14 March:

It now seems to me that what I wrote is not correct; however, I still don't understand how you can make it cost effective - having the issues of corrosion, salt build-up and second reticulation system?

How come this can be cost effective in Hong Kong? Is it due to the extreme density of housing? Or the very high cost of potable water (how high is it?). And are there any other cities in the world that also practise it to the same extent as Hong Kong, and if not, why not? Is Hong Kong's set-up very unique? What about Tokyo for example?

And did you get any further with your enquiries about the EcoVac toilet from Wostman in Sweden?
www.wostman.com/ecovac.html

(was listed in this document: susana.org/lang-en/library?view=ccbktypeitem&type=2&id=1148 )

P.S. I am curious: your last name does not sound like an Asian name. Are you from a country in Africa?
Head moderator of this Discussion Forum
(with financial support by GIZ from July to October 2021)

22 Apr 2014 11:31 #8288 by PatrickBBB
This article describes the climatic and hydrological conditions of Hong Kong in the context of water supply. The article also briefly describes the utilization of salt water for flushing:
myweb.polyu.edu.hk/~cekwchau/WRD.pdf (copy the URL into your browser, as direct click doesn't work)

It seems that the combination of a lack of fresh water sources and a high population density possibly coupled with too much variation of the rainfall makes it economically feasible. With a high enough discrepancy between supply and demand the most surprising technologies might be feasible. For instance; in the Canary island desalinated water is used for irrigation. All though I bet subsidies plays a major role in that particular case.

As for corrosion, that could easily be solved by using non-corrosive material (i.e. PVC)?
Salt-deposit I guess you could try to avoid any depression of the pipelines, also ensure that you have a self-cleaning velocity?
As for a second water distribution system, I guess there is no way around that?

I know there is some research in the Netherlands (in collaboration with researchers from Hong Kong and South Africa) regarding utilization of salt water for flushing. A really interesting side effect of using salt water is that you can treat the waste water with sulphate reducing bacteria. I am adding some interesting resources regarding this.

The main advantage of using seawater for toilet flushing (SWTF) is the ~20% saving in freshwater, which would have otherwise been used for flushing the toilet. This is relevant in regions of high water stress (ratio of total water withdrawals to renewable water sources; maplecroft.com/about/news/water-stress.html ) such as Hong Kong. The demand for more water is a result of high population growth, which is typical of emerging economies such as China, India, etc. So, for the little water that can be saved the better.

The advantage of the a dual pipe system (i.e. a separate pipe for SWTF) in places such as Hong Kong, is the high population density (6,746 capita/km^2, 2nd in the world after Singapore; UNdata, 2014). The per capita cost of the system is low. The high density factor is also why we are keen on the idea of struvite production from human urine. (Preliminary results on this latter indicate that a typical high-rise can produce a quantity of struvite 2-4 times its annual consumption of phosphates fertilisers).

The cost effectiveness mainly refers to the low energy consumption for pumping and treating (i.e. screening and electrochlorination) seawater before supplying it to houses. It does not include the capital investment or operating costs of the dual pipe system. My group mate is doing an economic comparison of the dual pipe system (including SWTF and sulphate-reducing-bacteria-based wastewater treatment) with major conventional water supplies and wastewater treatment systems, in the context of dense cities. I hope to keep you updated on it.

Yes, I did get replies regarding the EcoVac toilet. I have also visited their website.

Posted by a member of the urine separation group at the Hong Kong University of Science and Technology (HKUST) which values Seawater for toilet flushing (SWTF) as means to recover P from urine, and also for sludge minimisation in conventional BNR. Today, SWTF serves 80 % of the Hong Kong population.
You need to login to reply
Share this thread:
Copy URL
Recently active users. Who else has been active?
Time to create page: 0.266 seconds
Powered by Kunena Forum