Title of grant: Scaling up and Strengthening Community Approaches to Total Sanitation (CATS)

Developing country where the research is being or will be tested: Implementation in Indonesia and Malawi, enhanced global learning in East & South Africa (ESARO) and East Asia & Pacific (EAPRO) regions.

Short description of the project:
UNICEF is implementing Community Led Total Sanitation (CLTS) or CATS* programs in a large number of countries globally, mostly in Africa and Asia. This project is designed to assess and analyze CATS innovations and implementation strategies in two countries - Malawi and Indonesia - and to distil and disseminate lessons learned to other UNICEF country programs in Africa and Asia.

With a focus on learning and dissemination, the Regional Offices for East Asia and Pacific (EAPRO) and Eastern and Southern Asia (ESARO) are an integral part of the program and are responsible for:

o providing technical support to implementation countries;
o generating evidence and analysis through studies, assessments etc. for strengthened advocacy at country, regional and global levels;
o facilitating networking and learning exchange opportunities in-country, between countries in the region, cross-regions and across partners, and;
o undertaking the development of the CATS Monitoring Toolkit, case–studies etc., with the aim to strengthen sanitation programs in additional countries through enhanced learning and knowledge exchange both within UNICEF and with its partners.

Among other goals, the project seeks to meet ambitious Open Defecation Free (ODF) ‘hit rates’ , of 66% and a ‘reach’ target of 85%.

* CATS is an umbrella term developed by UNICEF to encompass a wide range of community-based sanitation programming (including CLTS, SLTS, TSC).


Goal: The overall goal of the project is to contribute towards international efforts to increase access to sanitation through the delivery of sustainable sanitation programs at scale in two countries.

The goal is also to contribute towards efforts to achieve the Millennium Development Goal for sanitation through the development and implementation of model approaches in two countries and enhanced global learning for sanitation programming in two regions. 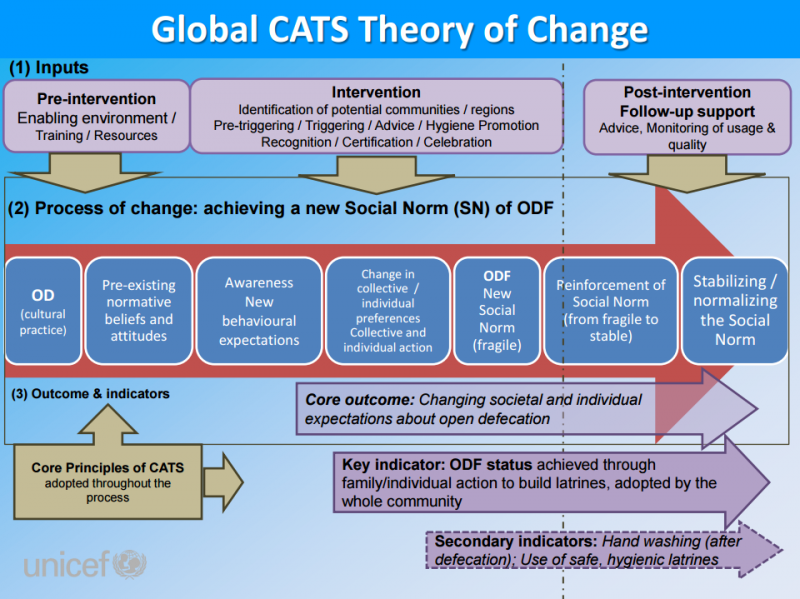 Objectives:
o Objective 1: Supplement and expand on-going sanitation programs in two countries (Indonesia and Malawi) with specific emphasis on learning through innovation
o Objective 2: Assess and analyze innovations and implementation strategies in these two countries in order to distil lessons learning and assess the impact of implementation modalities on progress, and to transmit this learning to other countries in two regions

Biggest successes so far:
In Indonesia, access to improved sanitation facilities currently stands at 59% of the population , which is significantly short of the MDG target of 86%. An estimated 54 million people still practice open defecation (OD), or about one quarter of the population. On a country basis, this is second only to the size of the population practicing OD in India. UNICEF is supporting Indonesia’s national “STBM” campaign to help accelerate sanitation progress. A number of key steps have been taken to systematize STBM, including a Knowledge, Attitudes, and Practice (KAP) survey, a review of the existing evidence, development of STBM training materials, establishment of a knowledge management framework, and undertaking Joint Technical monitoring Reviews with the Government of Indonesia. New alliances have been built to make sanitation and hygiene communications more effective; and the use of social media has been expanded. Through these efforts, the project is starting to better understand replication issues, although there is still work to be done. However, though the enabling environment in Indonesia is generally supportive, a number of key challenges remain, especially prioritization at local levels. Progress achieved against project targets has been off track in terms of number of new latrines constructed. Other challenges include lack of partner implementation capacity, low hit rate of ODF villages, continued fragmentation of the sanitation sector, and impediments to sharing and disseminating lessons learned and the latter remains one of the key objectives of the program.

Malawi declared, in its 2011 national sanitation strategy, that 2015 was the year it would achieve 100% ODF. This would be an astonishing achievement, since (as of 2012) Malawi’s national improved sanitation usage rate was only 10% . This challenge is in part what led UNICEF to select Malawi as one of the focus countries for this project. UNICEF is supporting the national ODF Task Force, and among other activities has helped to improve the national sanitation monitoring system. The project also is strengthening the supply side through latrine construction and business management training, and a marketing campaign carried out in partnership with PSI. However, cumulative progress has been slower than expected. New ODF communities number 446 (representing over 45,000 households). But the ODF ‘hit rate’ is only 30% after 6 months. Positive examples do exist, including one Traditional Area that has attained ODF and which serves as a constructive role model.

Main challenges / frustration:
In both countries, challenges include:
o Prioritization at local levels
o Lack of partner implementation capacity
o Low hit rate of ODF villages
o Continued fragmentation of the sanitation sector and impediments to sharing and disseminating lessons learned
Additionally, in Malawi, a devastating flood in 2015 has interrupted regular UNICEF programming and affected many communities targeted under this grant.

Next Steps:
In Indonesia, UNICEF will continue to support Government to improve communications and advocacy; promote stronger M&E, assess the potential for more intensive supply-side work, and improve post-triggering data capture and analysis. UNICEF also will increase its focus on accelerating progress in weaker-performing districts though the primary focus will be on learning the key lessons to help scaling up and acceleration of sanitation in Indonesia.
In Malawi, UNICEF will continue to work with Population Services International (PSI) to help strengthen sanitation marketing campaigns, and will increase its focus on strengthening local government leadership of sanitation campaigns.

Questions or comments? Please put them in this thread.

These updates are to provide more materials and a fuller picture around the learnings gained from this project thus far.

I welcome your comments or questions!

Thanks,
Keiko
You need to login to reply
Less

I was wondering how long after the implementation of the sanitation programmes the assessment is occurring? And is there any plan for further monitoring, to see if the schemes are sustained over a longer time period?

Caitlin
You need to login to reply
Page selection:
Share this thread:
Copy URL
Recently active users. Who else has been active?
Time to create page: 0.357 seconds
Powered by Kunena Forum