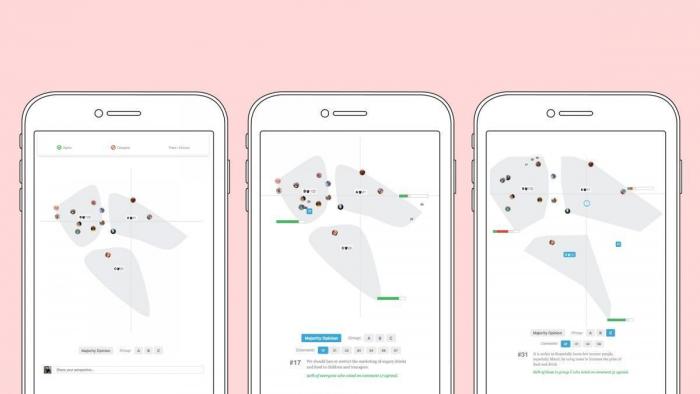 Examples where Pol.is been used:

New Zealand: blog.pol.is/pol-is-case-study-temperature-check-a02dff7cc838
Taiwan: civichall.org/civicist/vtaiwan-democracy-frontier/
Canada: www.canada.ca/en/canadian-heritage/progr...ty/backgrounder.html
Engagement platform POL.IS
POL.IS is a digital public engagement platform designed to gather feedback from large groups around a particular topic. It excels at gathering a diversity of opinion without giving priority to any particular aspect of the discussion. It also allows for conversations to evolve on a single platform, regardless of the official language with which a participant prefers to interact.

Polis is a new way to gather open ended feedback from large groups of people. It is well suited to gathering organic, authentic feedback while retaining minority opinions.


Problems and Purpose
The problem with surveys and comments

Humans will need to process the massive amount of text that results. This creates a burden on both survey research teams and comment moderators, respectively. It is also impossible to discern whether a given viewpoint is representative of the majority or not.

How polis is different

Polis overcomes these challenges and produces meaning from open ended responses. Participants can write what they think, but they can also agree and disagree with what others are saying one comment at a time. This process happens in real-time. As soon as someone writes, others can vote.Polis runs statistical analysis on these voting patterns, also in real-time. It produces opinion groups and surfaces the comments that brought each group together. It also surfaces comments that found broad consensus among participants.

Polis did not want them to feel intimidated or exhausted by the complexity of what had already occurred. That meant ditching threading and direct replies, so that comments didn't twist into a tangled nest.
Polis wanted everyone to be able to get a sense of what others felt, and what the consensus was, in seconds.
Polis wanted to preserve minority opinions. Polis doesn't use downvoting to invalidate upvoting. Polis doesn't use upvoting to invalidate upvoting. If it did, like other comment systems do: 200 upvotes + 200 downvotes = net zero votes. That math obscures the fact that there was some minority who felt differently, which we take as data to preserve. This took the form of creating and showing opinion groups.

Polis wanted to create a system that increased the number of roles available. More roles means more data, and more interesting outcomes. Somewhere south of 1% of users comment. Most users lurk - read but don't interact in the community. Pol.is typically sees 10x more people vote than those who comment.

Most generally, Polis wants to:
provide transparency,
produce insight,
decentralize power
in all kinds of organizations of people anywhere on Earth.