Use of viral agents to improve the economics of human waste disposal (Amrita School of Biotechnology, Amrita University, Kerala, India)

Use of viral agents to improve the economics of human waste disposal (Amrita School of Biotechnology, Amrita University, Kerala, India)

Title of grant: Use of viral agents (and microbial fuel cell and effective recycling strategies)* to improve the economics of human waste disposal

* Note: This is the original title proposed but reviewers advised not to include microbial fuel cell (MFC) in that project. Even though we are working on MFC for last several years, this is not included in this project. 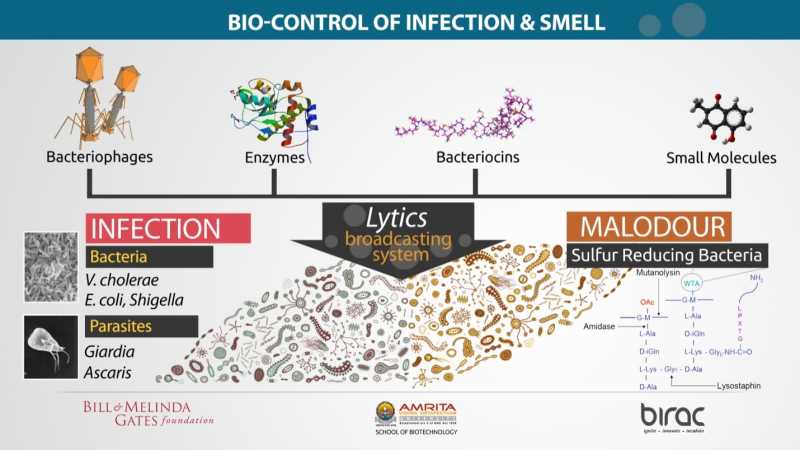 This is proof-of-concept grant, where we have proposed to develop appropriate lytic agents (which “lyse” or kill cells) against major enteric pathogens and sulfur reducing bacteria (that cause malodour in the sewage). After production in a cost effective way, the lytic agents need to be dispensed (broadcasted) in sewage/septic tank. Appropriate lytics broadcasting system (LBS) is being developed to filter and broadcast different lytic agents such as bacteriophages, enzymes, bacteriocins* and small molecules from cheap renewable natural sources such as plant biomass waste (kitchen/agro-waste). Among the lytic agents, bacteriophages (viruses infecting the bacteria) are highly specific to the target pathogens and hence very safe. They are the most important and abundant biological entities on earth. They have been used for over 90 years as an alternative to antibiotics in the former Soviet Union, eastern Europe and France. They are currently being tried as possible therapeutic agents against multi-drug-resistant strains of many bacteria. Phages against many food borne pathogens have been approved by FDA, US.

* Note: Bacteriocins are proteinaceous toxins produced by bacteria to inhibit the growth of similar or closely related bacterial strain(s)

Goal(s):
Reduction of pathogen load and odour in wastewater

Objectives:
Development of bacteriophages and other biological agents and their appropriate broadcasting system in wastewater

Current state of affairs:
After six months of the formal start of the project, we have been improving the strength and stability of the phages and other lytic agents so that they can be deployed in wastewater treatment. A prototype of the Lytics Broadcasting System (LBS) is being developed.

Appropriate lytics broadcasting system (LBS) is being developed to filter and broadcast different lytic agents such as bacteriophages, enzymes, bacteriocins and small molecules from cheap renewable natural sources such as plants, fungi and bacteria. Bacteriophages have been developed against five different enteric bacteria.

Overall, we have isolated about 25 phages against different strains of E. coli, Salmonella, Shigella, and Vibrio, procured either from hospitals or wastewater. Few phages have been also developed against sulfur reducing bacteria (SRB) such as Salmonella andProteus vulgaris. They were able to reduce production of hydrogen sulfide (one of major causes of the rotten egg smell). We have also started exploring the possibility of hosting the phage population in the human intestine surface layer (epithelia) so that they can work for the human host against the pathogens infecting the gastro-intestinal tract. Furthermore, we have isolated several E. coli bacteriophages that bind fibronectin and gelatin (denatured collagen) which are important matrix proteins of epithelial cells. We are currently testing their efficacy on protecting human epithelial cells (HT29) from E. coli infection.

This work has two purposes: test the safety of phages against human/animal exposure (even it is known as safe) and second is therapeutic purpose. This is not to be mixed with sanitation issue.

Main challenges:
The lytic agents are being made from mainly biological sources and they are susceptible to inhibition by heavy metals, detergents and other pollutants. Wastewater is very heterogeneous in composition with respect to biological pathogens, heavy metals, detergents, toiletries and other pollutants. Hence treatment procedures may be needed to be customized to tackle the inhibitors of the lytic agents. Thus the development and production cost may increase. In situ production of the lytic agents by the endogenous organisms which are not pathogenic and sustains pollutants in wastewater is one of the ideal ways. Our study should increase the deeper understanding of the different complex ecological interaction in wastewater and should be able to tackle these issues effectively.

Further information about the RTTC India grant scheme is also available here on the forum:
forum.susana.org/forum/categories/139-gr...nda-gates-foundation

The following user(s) like this post: pkjha, amritasalim, meg20, ArchanaPV
You need to login to reply
Less

Re: Use of viral agents to improve the economics of human waste disposal (Amrita School of Biotechnology, Amrita University, Kerala, India)

31 Jul 2015 12:05 #14357 by JKMakowka
Very interesting project... I looked into Bacteriophages as therapeutic agents quite deeply some years back and I do hope they make a come-back in that area.

However, I am skeptical when it comes to waste-water applications.

Contrary to food production where it is currently mainly used as an additional HACCP barrier preventing regrowth in an already low bacteria and usually cooled environment, sanitation systems are pretty much the epitome of where bacterial evolution happens (and thus partial resistance to Bacteriophages or the other lytic agents mentioned here).
Sanitation systems also tested for pathogens to much less detail and at longer intervals, making it very likely that bacterial adaption will occur unnoticed and treatment becomes inefficient.

Of course Bacteriophages will adapt as well, but unless their evolution is constantly guided by scientists with the specific objective of high lytic capacity, it is much more likely that they will become less virulent and somehow "arrange" themselves with their host bacteria.
The following user(s) like this post: spal05
You need to login to reply
Less

Re: Use of viral agents to improve the economics of human waste disposal (Amrita School of Biotechnology, Amrita University, Kerala, India)

02 Aug 2015 10:38 #14364 by spal05
Hi Kris
Thank you very much for your thoughts. We agree with your concerns. That's why we have given so much importance to develop the protocol so easy and cost effective which can potentially be done at the local level.
However, phage therapy has been successful to treat diarrhoeal infection in human gut which is as complex as waste water system. Moreover, risks of toxicity to higher organisms or non-target organisms in sanitation is much lesser compared to human therapeutic purposes. So we strongly believe if properly designed, phage intervention in sanitation should work. So far, attention in that regard (research focus) to the waste water has not been enough. We would love to hear from the community to know more about the possible risks of failure or any serious studies about them.

Thank you again, Kris.
Best regards.
Sanjay
The following user(s) like this post: JKMakowka, meg20
You need to login to reply
Page selection:
Share this thread:
Copy URL
Recently active users. Who else has been active?
Time to create page: 0.508 seconds
Powered by Kunena Forum