Testing the language switch button with Spanish and Swedish

Testing the language switch button with Spanish and Swedish

I had not really noticed that option at the bottom of the page to switch languages, but I just tried its Spanish and it is pretty good, in other words understandable but not quite right.

In the thread of the Featured User Interview with Scott Chen, I wrote:

Would it work for Google Translate to translate Susana posts to various languages and people who speak whichever language could sign up to receive the forum in their preferred language, with the option for these same members to correct the translations whenever they like? If anyone abuses this privilege, it can be taken away. ... Google might like this idea enough to help set it up.

In any case, I am available to translate to and from Spanish, whenever a human being is preferred. I could also proofread computer translations.

I'll try answering your post in Swedish AFTER having switched the entire site into Swedish.

03 Nov 2016 15:00 #19502 by arno
Hi Chris
I noticed that when translation is turned on Google provides a language control ribbon at the top which allows for fast language navigation plus a button to show the original while within the translated site. 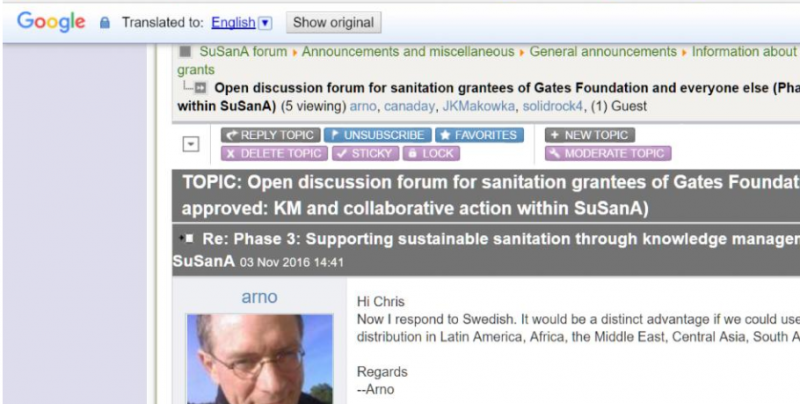 Do encourage your colleagues to test this out in Spanish.

The translator works pretty well taking the content into Spanish and in English.

Did you say "Now I respond to Swedish"?

This translator is a big help.