10 Nov 2019 03:26 #28410 by goeco
This is a design for a "Second generation" secondary vermifiltration reactor with a virtually unlimited media depth, that incorporates ventilation through the media using plastic drainage cells: 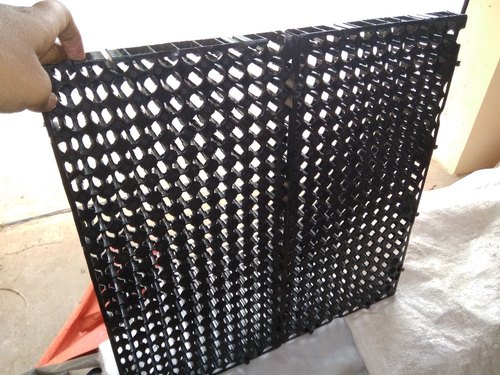 The design attaches vertical drainage cells together with cable ties into a self-supporting structure with cavities or "columns" that have a ventilated air space between them. 500 - 600 mm width drainage cells are the optimum size, each column has a single influent entry point at the top: 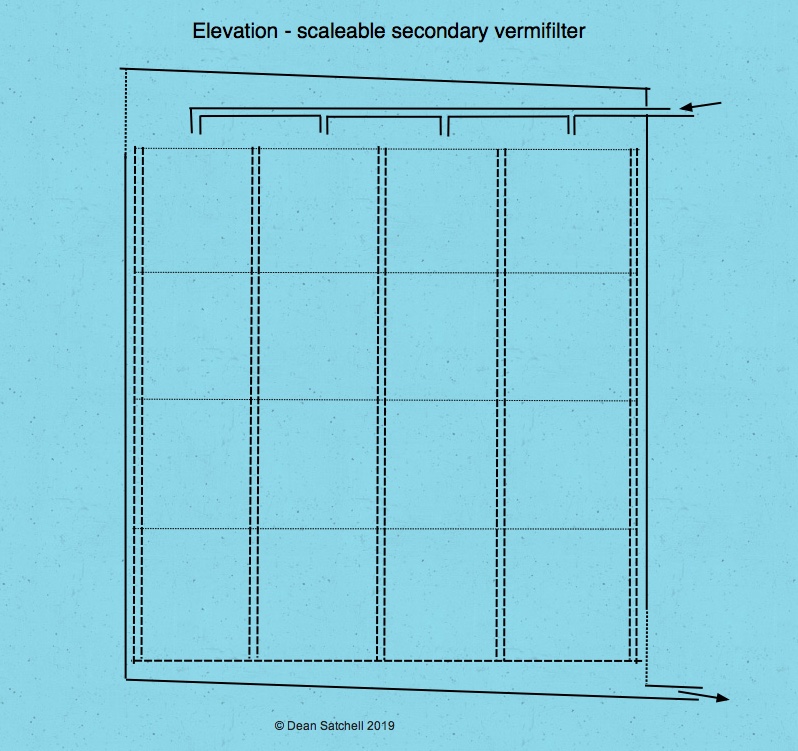 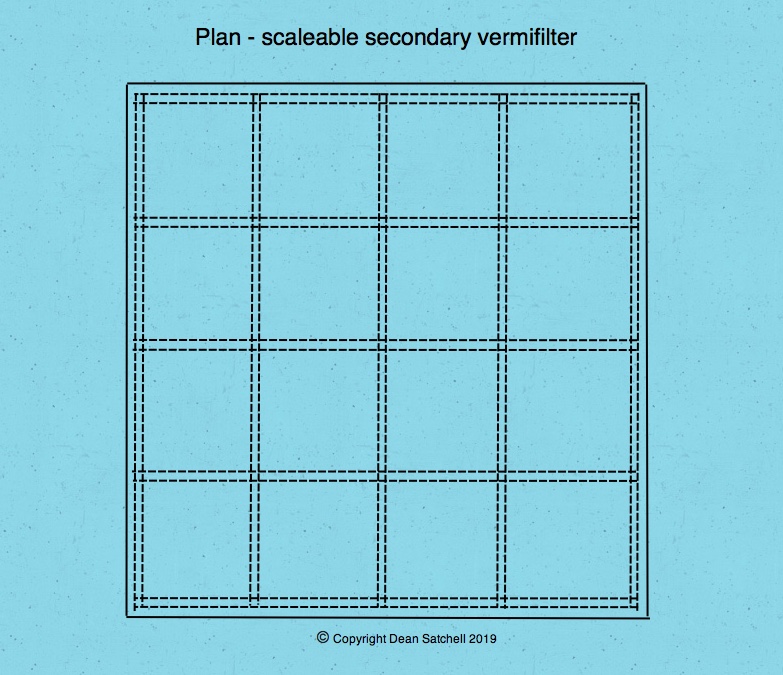 Each column is a vertical cavity the height of the structure. A textile cloth "sock" is inserted into each column and filled with media. The sock holds the media in place but also is free draining and allows worms to migrate from one column to the next: 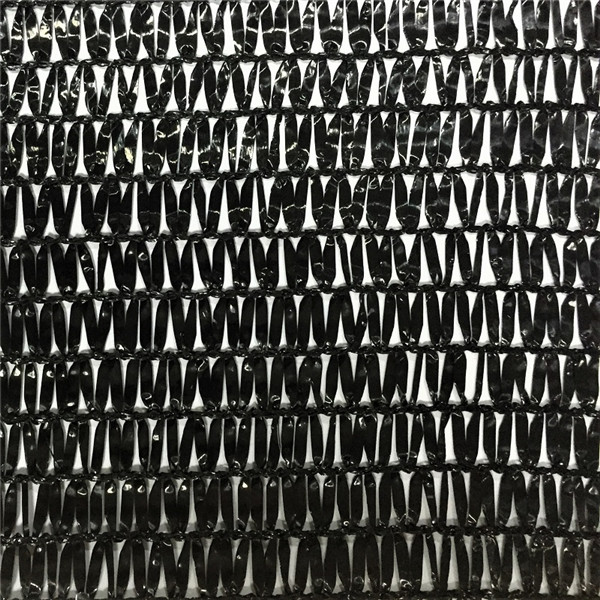 The cavity in each drainage cell allows air to flow right around each column and throughout the full height of the column, ensuring adequate ventilation into the media regardless of how deep the reactor is. The deeper the reactor, the greater the level of treatment.

Note that walls and roof enclose the reactor and these have ventilation grills at both the bottom and top to allow for good passive air flow, but also restrict vermin and insect entry.

The structure would be installed on top of a false floor that allows ventilation underneath the reactor but also acts as a sump to direct flow of treated wastewater out of the reactor. The false floor could be made from plastic pallets that sit on a concrete surface: 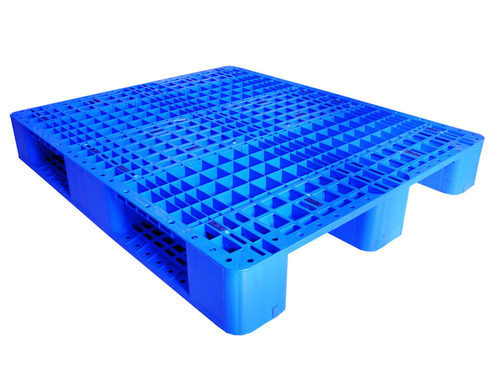 This design is suitable for both recirculating and single pass commercial-scale secondary vermifilters and is fully scaleable for both depth and width by simply adding more drainage cells.
Dean Satchell, M For. Sc.
Vermifilter.com
www.vermifilter.com 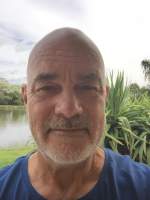 10 Nov 2019 23:20 #28412 by HarryTams
Thank you for this simple and very scale-able design. The drainage panels appear to be an ideal material that I have only seen for the first time 2 years ago. I hope to use your design for a toilet and kitchen sink in a 1 person dwelling. I'm considering the use of a small macerating pump to get to the top of the vermifier.
Harry
You need to login to reply
Less

11 Nov 2019 07:16 #28413 by goeco
Hi Harry,
your toilet and kitchen sink can feed straight into a primary vermidigester, which filters out and decomposes the solids. Make it wide... the easiest materials for making one of these is a 1m3 fruit bin (the forklift type): 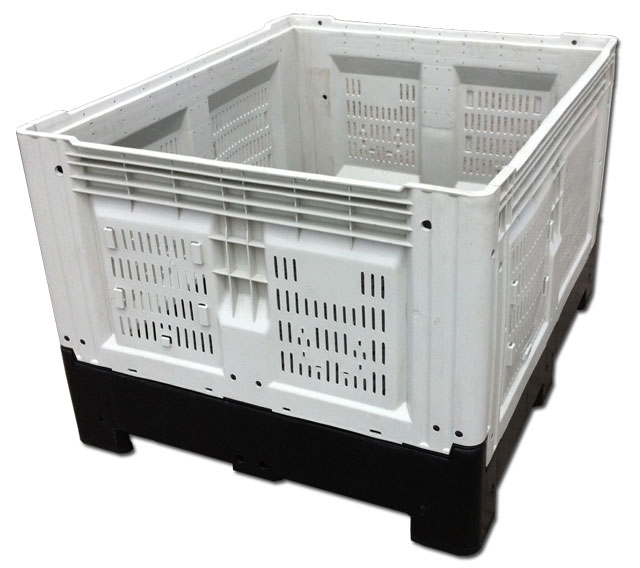 Textile cloth inside, with a 10cm layer of pine bark. Add the worms in a month or two.

The water filters through the media into a sump below the digester, where you can set up a 12v macerator pump and float switch at the bottom. This would pick up any sediment that settles and yes, you'd pump the liquid into the top of the secondary vermifilter. 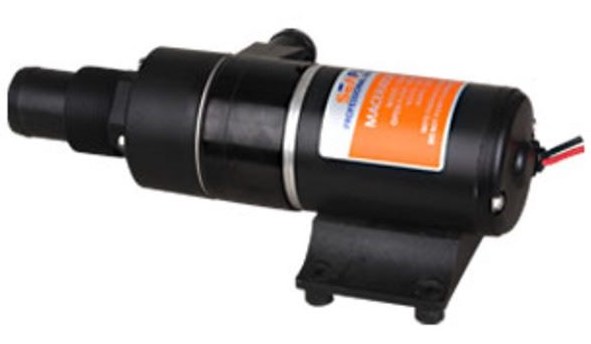 I've had no problems with the seaflo 12v macerator, this lifts over 10 m head.

You'd really only need one secondary column, but you could make it say 2m high and the cavity in the drainage cell would provide ventilation between the substrate and the cladding.

I recommend composted bark as the medium, plenty of that in Tazzie! Good luck and let us know how you go...

11 Nov 2019 23:47 #28423 by HarryTams
Is it really as simple as that?
I notice that the fruit bin pictured is vented. The ones i have seen here and used in vineyards are like tanks to hold grapes. Are we after bins that are vented?
I have a small fruit grove of a dozen trees bordered will tall native grass (Lomandra Elongata). In total about 75 square meters that will be irrigated from this set-up. Directly into the ground with flexible slotted 75mm drainage pipe.
Will this proposed set-up be sufficient?
Harry
You need to login to reply
Less

12 Nov 2019 07:21 #28424 by goeco
Hi Harry, yes indeed it is that simple. You do need fruit bins with the sides ventilated and you make a cavity between the walls of the crate and your cladding, for ventilation. 75 square metres is more than enough, but remember you will need some pressure for your drippers - you will need a sump under your secondary reactor and either another pump with a float switch, or else raise your secondary filter as high as you can (noting the head of your macerator pump) and use gravity for pressure. If you use gravity you should dose the irrigation lines so the water doesn't drip through only the first and easiest drippers. I can help with a dosage valve for the sump.

Cheers
Dean
Dean Satchell, M For. Sc.
Vermifilter.com
www.vermifilter.com
The following user(s) like this post: HarryTams
You need to login to reply
Less

with the plastic drainage cells, I have the following concerns and questions:

Although I appreciate that the system has all features allowing optimal VC operations, I see its problems in eventual necessary maintenance. In this regard the system with the fruit crates is more appropriate. A block of 4 x 3 x 3 fruit crates can easily be dismantled for maintenance. I agree this system is likely to be more expensive than this 'second generation'.

And one aspect which I have to repeat again: the crates will look more professional than the drainage cells to prospective administrators and financiers who still need to be convinced of VC technology.

ciao
Hajo
We can't solve problems by using the same kind of thinking we used when we created them.
Albert Einstein
Any intelligent fool can make things bigger and more complex... It takes a touch of a genius - and a lot of courage to move in the opposite direction.
E.F. Schumacher
Everything should be made as simple as possible, but not simpler.

Albert Einstein
The following user(s) like this post: HarryTams, goeco
You need to login to reply
Less

18 Nov 2019 08:56 #28458 by goeco
Hi Hajo, good questions, thanks for these. I have not constructed one of these but have published the concept here so that it is open-sourced and therefore not patentable. Having reviewed some of the vermifiltration patents recently I believe it is in the interests of the sanitation community for innovations in this field to be open sourced for the benefit of everybody. I'm also putting it out there to hopefully arouse interest in construction of prototypes, noting that affordable sanitation is one of the biggest issues mankind currently faces.

I describe this as second generation technology because it overcomes some of the key limitations to the currently commercialised technology. These include:


1. did you test that the structure is strong enough to contain the weight of the filter media once the filter becomes 3m or higher? I am specifically concerned about the cable binders, but also the drainage cells may not be made to hold weight.

What attracted me to drainage cells is their strength. They are designed for large weight loads and by placing them vertically on edge all the cable ties do is hold them in place - there is almost no load on the cable ties. Cable ties also come in lots of sizes and are made from nylon - they are designed to be strong. Sure, there might be a height limit for such a structure, but because the structure is a lattice I would not expect there to be any problem up to 10m... which is way higher than I was imagining the optimum treatment height to be anyway.

2. filling the 'socks' in the column may not be easy once we get above 3m.

I'm not sure why, could you explain?

3. if you ever have to maintain the system, i.e. replacing the media because it has become blocked or polluted by misuse, you have no choice than dismantling all the relevant columns.

What maintenance are you envisaging? Certainly if you used inorganic media (gravels etc), porosity would decrease over time as the inter-particle spaces become occupied with humus. Because I only use organic media, the only issue would be initially topping up the media as it degrades. Once the media is a stable humus, topping up would become much less frequent and this would be easy anyway. Another issue could be compaction of the media. As reactor depth increases, the weight of the media could compress the media more in the lower section of the column. Thereore, I just don't know what depth of media is optimal and the only way to find out is to build prototypes. I would take a conservative approach to depth and start with 2m... perhaps be bold and try 3m. I would also suggest that 30mm core thickness drainage cells would never block during the normal life of a second generation vermifilter, but because worms are distributing their castings indiscriminately, some humus will end up in the cavity. Maybe 50 mm core thickness would be best. Or perhaps every 20-30 years the vermifilter would need to be dismantled, then reassembled. Not a deal breaker though... and if the structure requires dismantling and reassembling this would be very easy - a pair of cutters for the cable ties, one column at a time. The drainage cells wouldn't be damaged and could simply be assembled again. The socks would be emptied of contents in stages as the drainage cells are removed. Everything, including socks and media could be reused.

What examples of misuse would pollute the media such that it would need replacing? I can't think of circumstances where organic media would need to be replaced, and in fact vermi-humus should become a tradeable product for application as 'elite' media in vermifilters because of its longevity and performance.

I am not convinced that crates would look more professional, because in both cases I would expect the reactor to be clad in a sheet material (plywood, fibrolite, sheet metal), or perhaps even textile cloth. I believe there is a significant cost saving by using drainage cells, along with improved performance, over stacked crates.

cheers
Dean
Dean Satchell, M For. Sc.
Vermifilter.com
www.vermifilter.com
The following user(s) like this post: HarryTams
You need to login to reply
Less

I have taken note of the 10 meter height that that little pump can go and I do have at least 8 meters rise on this property above the pump under the primary digester. I can use a gravity system from the secondary digester to irrigate the fruit trees. Details for a dosing valve and sump would be appreciated.

Would there be any odour from the primary digester from a 1 toilet, 1 kitchen, one person system?

I'll be in Canada until early January so will not construct the system until mid January.
Harry
You need to login to reply
Recently active users. Who else has been active?
Time to create page: 0.803 seconds
Powered by Kunena Forum