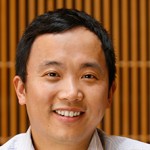 30 Nov 2011 15:11 #2857 by yjtang
Tang Lab studies microbial cells as factories for production of bio-products and remediation of toxic compounds. Our research involves interdisciplinary fields ranging from microbiology/molecular biology to chemical and bioprocess engineering. On the biological side: we develop and studied the functional genomics tools to provide quantitative readout of metabolic status; (2) apply computer models to describe the cellular metabolism; (3) build microbial strains to produce biofuel or detoxify contaminants. On the engineering side, we will use natural environmental microorganisms or genetically modified species in large scale processes such as in situ bioremediation or reactor engineering process. Our final goal is to bridge the gap between advanced biological researches and their applications in bioprocess/environmental engineering .

By the way, the presentation about your grant which you gave last October in Durban is available on the SuSanA website here: www.susana.org/en/resources/library/details/1710


+++++++++++
Edit by EvM: further information by Yinjie:
The grant started November 2011. The project should be ended by April of 2013, but I have accomplished and published the work ahead of time. We have another paper under review now. We will update the final report by the summer.

The research was carried out at Washington University, St. Louis, Missouri, USA
You need to login to reply
Less

1. Have you made any calculations as to the practical scaled up capacity of this sort of acetate transformation process could be?
2. What is the potential lipid content of sewage sludge?
3. What about the sludge from septic tanks and pit latrines?
4. What other sources of acetate are there that can be combined?
5. What class of biofuel are we talking about here and what would be the theoretical tonnage that could be produced say per ton of dry sludge?
6. Any idea about possible relative costs?
7. Have you seen the work from South Korea on the topic? pubs.acs.org/doi/pdf/10.1021/es3019435 Comments on that free lipid extraction method?

I hope you still take the time to respond to Arno's questions.

My questions to Yinjie: Regards,
Elisabeth
Dr. Elisabeth von Muench
Independent consultant located in Ulm, Germany
This email address is being protected from spambots. You need JavaScript enabled to view it.
Twitter: @EvMuench
Founder of WikiProject Sanitation: en.wikipedia.org/wiki/Wikipedia:WikiProject_Sanitation
My Wikipedia user profile: en.wikipedia.org/wiki/User:EMsmile
You need to login to reply
Less

My research is not on biogas production. We want to make high-value products using wastes. Our suggestion is to use AD for acid accumulation by inhibiting biogas production. Then use acids as the substrate for fermentation. In the past, anaerobic digestion for acetate production has been developed by Mark Holtzapple (Texas A&M). The waste acetate can be purified and chemically converted to biofuel. However, such method is costly since acetate concentration from AD is below 50g/L. There are other complex N, P, C substrates in AD solution. Thereby, we use the engineered strain to convert low concentration waste acetate into high quality fatty acids (in the future, we hope to make FAEE biodiesel directly). FAEE can be easily secreted by cell and recovered as a biofuel.


The project was funded by Gates Foundation (2011~2012). However, we (WUSTL and my collaborators at MSU) did not get the Phase II funding from Gates Foundation to continue this work. I hope people can follow this direction. This technology can be applied in developing countries where the weather is hot and biomass is abundant (e.g., Africa). Such bio-process is particular suitable for development of localized and small operation facilities to fulfill both waste management and bioenergy generations, and thus creating “green” jobs for people in the world.
You need to login to reply
Less

This project emphasizes on microbial production of biodiesel, an excellent drop-in replacement for diesel and jet fuels. Currently, anaerobic digestion has been proven effective at converting organic wastes into methane. However, methane is a cheap biogas and its primary revenue is for electricity generation. According to Dr. Mark Holtzapple (Texas A&M), methane is currently valued at approximately $4 per million Btu, while drop-in biofuels that can be manufactured from carboxylates produced by anaerobic digestions are worth $20 per million Btu ( biomassmagazine.com/articles/7060/an-anaerobic-alternative ). His group has built a pilot-scale facility to produce acetate by digestion biomass wastes. The acetate can be chemically converted into ketones and alcohols. However, such conversion is expensive because acetate has to be separated from many other coexisting chemicals. Purification increases the cost significantly. Furthermore, acetate concentrations from these wastes are usually low (<50g/L), making the chemical conversion inefficient.

Based on Dr. Holtzapple’s previous work, We have proposed a modified two-stage conversion process. The first stage is anaerobic digestion to convert waste into acetic acid (the methanogesis can be chemically inhibited by iodoform). In the second stage, acetate can be converted into fatty acids using engineered E.coli strains. The engineered strain can generate medium-chain fatty acids (C12:0–C14:0), which improve biodiesel quality comparing to the natural fat in bio-wastes. This method can be economically feasible because of several reasons, 1) Sources for acetate from anaerobic digestion of wastes are diverse and plentiful. 2) Engineered E. coil could easily grow at various acetate wastes and use other nutrient sources (N and P) in waste streams, preventing the purification of acetic acid from other waste chemicals. 3) The whole process does not require high temperature and pressure, and organic solvent. 4) Acetate is miscible with water, allowing easy mass transfer during fermentation. 5) Acetate has energy content comparable to glucose under aerobic conditions which can be readily converted into diverse products.

As for free lipid extraction method, it requires large amounts of organic solvents and energy consumed by chemical conversion may lead to a significantly environmental concern.

In current stage, I cannot answer the ranges of operating conditions and production scales needed to deploy a profitable and environmental friendly waste-to-biofuel process without a rigorous analysis. In my opinion, the technologies for acetate production from anaerobic digestion of biomass wastes and genetic engineering of E.coli are well-established. Also, there are approximate 180 billion metric tons of agricultural residues (animal manure and crop residues) and 2 billion metric tons of dry municipal solid wastes produced annually in the world. The plentiful resource gives great potential for scaling up our process for advanced fuel production.
You need to login to reply
Less

19 Feb 2013 22:17 #3524 by arno
Thanks Yinjie.
What then would an optimal strategy be for using organic wastes as a source of various carbon fuels that are profitable? The various physical fractions of fermented sludge, manure, etc. can be used for different products depending on what is easily produced and refined. Obviously gaseous products like methane are relatively easy to refine by removing contaminants like hydrogen sulfide and water. But the fatty acids you could be producing from the supernatant would still require refining. And what sorts of product concentrations are feasible for these biochemical reactions. Finally engineered E coli is not something that should be let loose into the environment. So what are the licensing restrictions here and at what sort of scale can this be done if the fermentors need to be isolated from the open environment?
--Arno

Arno Rosemarin PhD
Stockholm Environment Institute
This email address is being protected from spambots. You need JavaScript enabled to view it.
www.sei.org
www.ecosanres.org

You need to login to reply
Page selection:
Share this thread:
Copy URL
Recently active users. Who else has been active?
Time to create page: 0.268 seconds
Powered by Kunena Forum