22 Sep 2013 19:38 #5716 by Elisabeth
Some of you may have noticed that we recently added two new pieces of information to the user profile which is displayed next to a user's post.
These are: It looks like this for example:

Why have we done this?

It is an attempt to generate information so that users can get a rough idea of the "esteem" that other users have been awarded by others on the forum. So that if someone makes a bold statement and you are wondering "could this be true?", and then you see that this person has received already 100 Likes for past posts and has e.g. 50 karma points then you might think to yourself "could well be true"; whereas if he/she has few Likes received and few karma points you might be more hesitant to follow the person's argument. (but of course it could also be that this second person has only recently joined the forum and thus has accumulated fewer Likes and karma points for that reason; so be careful)

Of course this method is not fool-proof. It is just an approach.

Note the "Likes given" and "Likes received" come from the button called "I like this post" which you can click on underneath someone's post (you have to be logged in to see it). The number displayed there is a summation of all the Likes since the user started, e.g. it could be since two years ago.

Feel free to start handing out karma points if you want to hand out a sign of esteem for a certain user (by clicking on the green plus sign to the left of someone's post).

The system is set up so that:
Once the system with the karma points has been going for a while, it could also be interesting to look at the ranking by users by karma points every now and again. You can access it under the Button "Basics", then "Statistics" (top menu bar, the white text on black) or under "Search & Navigation", then "Find User". 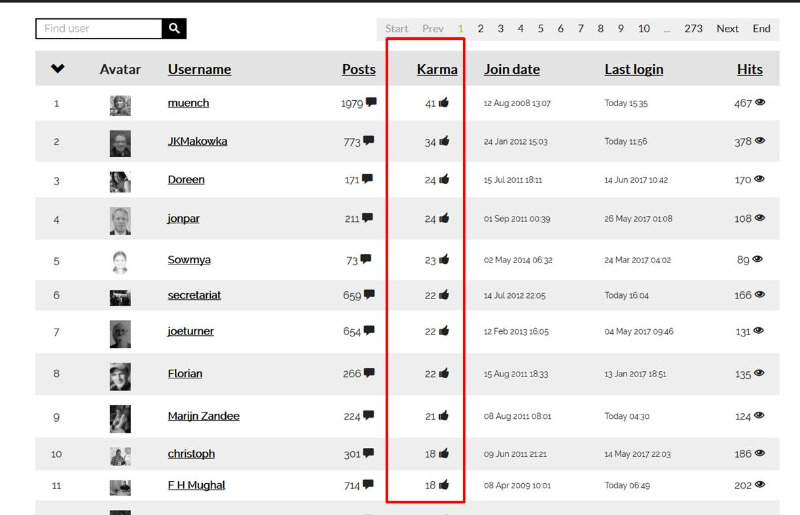 A word of caution: please don't take this all too seriously. Don't get upset if you don't have many karma points yet. See it more like a game - something fun (with a useful aspect to it).

The theory behind this is called gamification strategy, and I was introduced to it by Juergen Eichholz: It's about using elements of "playing" to engage users in the forum and making it more fun for them to participate.
Wikipedia gives a good explanation of what gamification is:
en.wikipedia.org/wiki/Gamification

If anyone has examples of similar little fun or practical things implemented on other people's forums or websites, please let us know so that we can investigate if it's worth doing it for SuSanA forum or website as well.

You need to login to reply
Page selection:
Share this thread:
Copy URL
Recently active users. Who else has been active?
Time to create page: 0.386 seconds
Powered by Kunena Forum