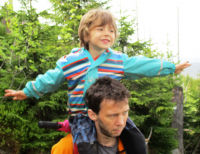 I hope that our latest review paper (attached) might be interesting for SuSanA members. It discusses more general issues around context reflexivity and provides a synthesis of evidence on sanitation determinants and the outcomes they influence including a graphical synthesis referred to as the "sanitation nexus".

Thanks so much for posting your paper here and opening it up for discussion. I wish more authors would do that! I am trying to get my head around what you have done. As it's new for me I was looking for something visual and found your sanitation nexus graphic here which looks very impressive: 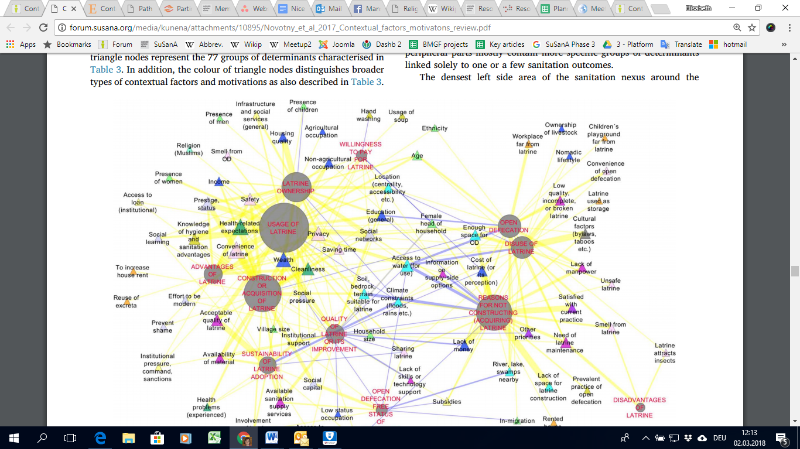 To make it easier for us to grasp your work, do you have perhaps a powerpoint presentation to share? It might be a nice summary of your paper.

I see that you are from Czech Republic (possibly the first time that someone from that country posted here): Charles University, Faculty of Science, Department of Social Geography and Regional Development, Albertov 6, Prague 2, 12843, Czech Republic

Could you tell us more about your ongoing research on sanitation aspects in developing countries? Funded by whom and which countries are you focusing on? Thanks.

02 Mar 2018 11:34 #24240 by pepino
Dear Elisabeth,
thank you very much for your comment and interest in our work. I dont have a ppt presentation but I think it is relatively easy to outline basic steps in our work and underlying reasoning:

1. Based on discussions with practitioners and our earlier knowledge of literature we found out that traditional ways of evidence synthesis that typically attemt to (preferentially quantitatively) synthesize evidence on effects of an intervention may not be useful (and even possible) in the area of sanitation (here defined rather narrowly) because of a high importance of contextual specifics.

2. Our modest goal for this review was thus to map which contextual factors (and specific motivations) are docummented and reported in literature dealing with community approaches to rural sanitation.

3. To "organize" our thinking (and terminology) we developed a "logical model of sanitation" (Figure 1 in our paper). It helped us to clearly determine what we then extracted from analyzed studies.

4. To determine the final sample of studies to be used for "data extraction" we conducted a systematic search of journal and grey literature and the assessments of relevance and methodological quality of literature according to a predevined set of criteria.

5. From the final sample of primary studies we extracted their findings on (i) various sanitation-related outcomes they analyze and (ii) on factors these studies identify as important drivers of these outcomes (importnantly, we recorded these observations as pairwise relationships between a factor and an outcome).

7. We use a network analysis to generat the network visualisation that we refer to as "sanitation nexus". Circular nodes represent types of identified sanitation outcomes and triangle nodes represent types of their influencing factors. Links between nodes refer to how many links betwee a given type of outcomes and a given type of factors we identified from literature. In addition, colour of links indicate the nature of prevailing relationships (eg positive-yelow and negative-blue colour)

8. To understand the network you can imagine it as a physical system where nodes influence each other via attracting forces with strengths proportional to their links. The algorithm minimizes the energy of the physical system and assigns the nodes with positions in two-dimensional space accordingly.

9. As such, our sanitation nexus show which types of factors tend to influence which sanitation outcomes. In addition, it also indicated how similar are particular types of outcomes with respect to their underlying drivers (those more proximate in the network plot tend to be influenced by similar drivers).

10. Although I assume that much of the information on outcomes and factors are probaly known to experienced WASH/sanitation practioitoners, our work documments what is intuitively known using a systematic and rigorous way of evidence synthesis. We thus do hope that it might be intersting for pracititioners and researchers.


As for our team, we are a small group (me and a few of my students) based at CHarles University, Czechia. In addition to systematic reviews (now finilizing another one specifically on CLTS), we did case studies on sanitation in south Ethiopia (Wolayta) and India (Jharkhand) funded by the Czech Science Foundation. I am now trying to secure new funding for repeating the case studies in the same locations to explore the sustainability issues around. We are geographers and I think (as geographers) we are trying to take the role of contextual variations more seriously and also focus more on the analysis of processes underlying sanitation change instead of concentrating solely on isolating effects of interventions (which is in my opinion a common approach in the research in this area).

Here is our paper from Ethiopia and we have other studies under review in journals.
The Role of Perceived Social Norms in Rural Sanitation: An Explorative Study from Infrastructure-Restricted Settings of South Ethiopia
The following user(s) like this post: Elisabeth
You need to login to reply
Page selection:
Share this thread:
Copy URL
Recently active users. Who else has been active?
Time to create page: 0.353 seconds
Powered by Kunena Forum