Using Twitter to increase the impact of your work, as a research tool, to make connections and to map out our network?

Using Twitter to increase the impact of your work, as a research tool, to make connections and to map out our network?

1. The Guardian did a review of the top Water and Development Twitter Influencers prior to the World Water Week meeting in 2014:
www.theguardian.com/global-development-p...-twitter-influencers

The results gave the following top users: 2. It’s difficult to scan Twitter to find the most active users for a specific topic. Searching for a topic provides a fixed and limited number of user addresses.

3. Statistics are hard to come by and are sold by entrepreneurs. The quality of the data cannot be corroborated. Twitter only provides statistics on your own account. One source from Dec 2015 is expandedramblings.com/index.php/march-20...azing-twitter-stats/ In terms of global outreach Twitter is dominated by users in the US and Europe. There about 100 million daily users. The average number of followers is about 200 per account.

4. The first impression is that this is not a very effective tool for outreach within the area of environment and development let alone the WASH or sanitation sectors. Still there are small communities that have developed.

5. A look at who follows @susana_org provides about 2500 followers twitter.com/susana_org/ These in turn can be analysed to expand the network. There are software tools to help analyse social media data that can result in illustrations like this one: 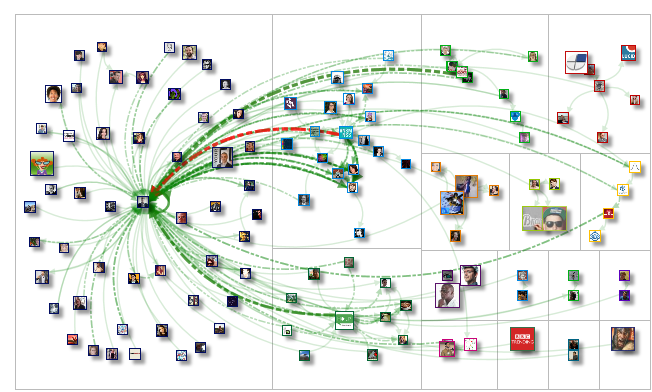 If you are interested we could delve into this a little further to assess the sanitation network on Twitter, who is who and who is doing what. We could compile some relevant questions and observations which may be of interest to others on the Forum.

Re: Using Twitter to increase the impact of your work, as a research tool, to make connections and to map out our network?

People use Twitter in different ways. Some seek to influence and are successful. Other Tweeters fail to influence. Still others simply abandon use, which accounts for the large number of inactive Twitter accounts. Other may simply use Twitter as an aide-memoire, using the 140 characters to annotate what may later become a bibliographic reference.

Among the organizations on the list of water and sanitation influencers Arno mentions are two individuals who use Twitter in very different ways: Alexander Verbeek and Catarina de Albuquerque. @CatarinadeAlbuq is a restrained Tweeter whose Tweets on sanitation and human rights - particularly when she was the UN Special Rapporteur - have influenced my colleagues and me. @Alex_Verbeek is a plain language popularizer of science relating to the energy-food-water complex who follows over 50K Tweeters and is followed by more than 87K. Broadly educational.

Twitter itself has changed. The addition of images and the recent replacement of stars with hearts annoys many of us. Although it's been dumbed down a bit on the surface, Twitter has remained quite professional. It's not a love fest.

For me, Twitter remains a tool for research tool rather than a tool for outreach. I find it especially useful for identifying breaking science writing and new reports in several of my areas of interest. I also use it to applaud the few journalists who cover toilet and sewer issues in North America. Twitter has help establish some very good and trusting relationships. Here are some elements I focus on.

1. Lists. A list is a curated group of Twitter users and a great way to organize your interests. With lists there is little need to follow lots of people or to be followed. Lists can be as narrow or broad as one likes. And they can be public or private. Some lists you create and manage yourself. If they are public others may subscribe to them. You may be made a member of lists created by others. And you may subscribe to lists created by others. For example @PortlandPHLUSH has a public list called WWTPs for "Wastewater treatment plants that Tweet to the public." Invalid consumer key/secret in configuration As we're looking into the energy use, costs and carbon footprints of WWTPs I’ll check this list and make inquiries with either my own public tweets (I'm @Baggywrinkles)or, if possible, direct messages. By the way, should a list you follow include accounts you follow, incoming tweets appear only once.

Here is more about lists. support.twitter.com/articles/76460 and an important reminder. Lists are used for reading Tweets only. You cannot send or direct a Tweet to members of a list, for only those list members to see.

2. Tweet Deck. TweetDeck by Twitter bills itself as "The most powerful Twitter tool for real-time tracking, organizing, and engagement." about.twitter.com/products/tweetdeck It allows you to line up columns on your screen. Columns can be lists (your own or those of others), individual Twitter account, hashtags, or search words.

3. Profiles. Profiles are mini bios. At a glance they give some idea of why a person is on Twitter, how focussed they are on issues of mutual interest. People now self identify with everything from organization and personal websites to hash tags and emojis.

4. Followers. Following individuals brings their attention to your profile and tweets. Follow back those with whom you might want to communicate briefly and privately using direct messages. This can help keep email out of your box and the DMs can remain always available and easy to locate in a Messages column on Tweet Deck.

5. Blocking Tweeters. This is not something you use much because Twitter is quite civil. But occasionally you're followed by someone selling something or who just seems a little sketchy. Nothing is easier than blocking them.

Re: Using Twitter to increase the impact of your work, as a research tool, to make connections and to map out our network?

Thanks a lot for your description of some key elements on twitter. I use twitter and I like it but I am quite a novice compared to you: I have e.g. not yet understood the use of lists and tweet deck. Perhaps in one of the upcoming SuSanA webinars you could give a demonstration?

Do you think it's worthwhile creating a list of twitter accounts of SuSanA partner organizations? Would that achieve anything? (I still don't fully grasp the concept of lists).

The network analysis of twitter followers (i.e. who follows whom) that Arno mentions above also leaves me puzzled. Not sure what that would really tell us.

My twitter name is @EvMuench and I follow 132 people, and have just over 500 followers. I would like to follow more people/organisations but I find that this ends up in information overload, particularly if people do many tweets per day. I still haven't figured out a way of handling that (I usually end up unfollowing those very frequent tweeters because I find it too much) - how could lists help me with that?

The other day Sue Desmond-Hellmann, the CEO of the Gates Foundation, made a tweet about the importance of open access; I replied to the tweet by saying "18 March: @SueDHellmann I am so impressed with BMGF's open access policy for #sanitation projects that it funds! Thank you. forum.susana.org/forum/categories/139-in...ications-from-grants ". A short while later, I got a notification that she "liked" my tweet and that really made my day!! Most likely she has assistants who manage her twitter account for her, or who help her, but still, I was quite chuffed. It makes me feel like I can be in contact with someone really high up. If she was ever to re-tweet something I had tweeted, that would be awesome. (getting someone who has a vast number of followers to retweet you is a real success)

I would be curious to hear how other SuSanA members use twitter for their work? Or if they don't use it, why not? (I only started using it three years ago; before that I used to think it was totally weird and I didn't understand the tweets which were full of these symbols: # @ ... Then Juergen Eichholz gave us a demo at GIZ and it got me curious; later on Arno Rosemarin explained to me how it's used at SEI and then I decided to give it a go).

Dr. Elisabeth von Muench
Independent consultant located in Brisbane, Australia
This email address is being protected from spambots. You need JavaScript enabled to view it.
Twitter: @EvMuench
Founder of WikiProject Sanitation: en.wikipedia.org/wiki/Wikipedia:WikiProject_Sanitation
My Wikipedia user profile: en.wikipedia.org/wiki/User:EMsmile
You need to login to reply
Share this thread:
Copy URL
Recently active users. Who else has been active?
Time to create page: 0.410 seconds
Powered by Kunena Forum