19 Jul 2019 07:36 #27861 by SCIFIsanitation
Centre for Policy Research is pleased to invite you to a CORP seminar supported by the Bill and Melinda Gates Foundation on
'Malaysia's Sewerage and Sanitation Sector Regulatory Framework' 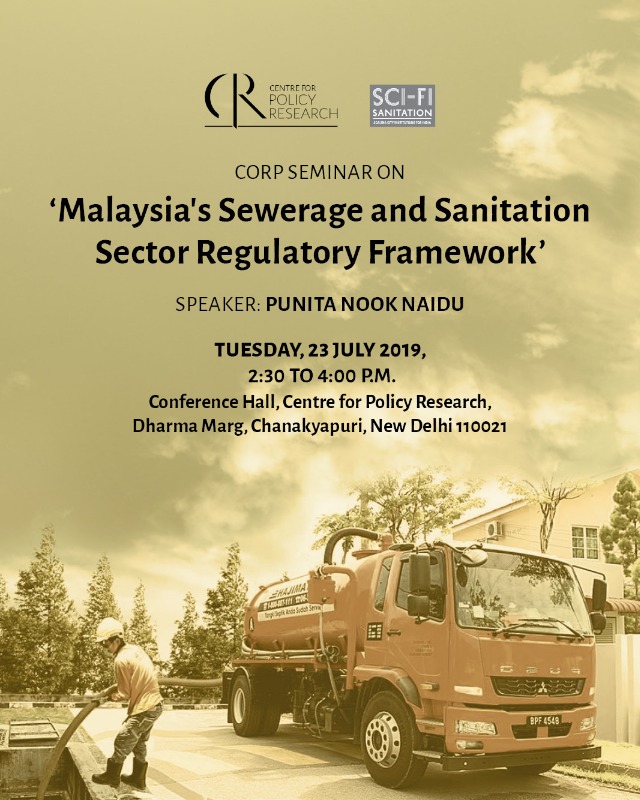 Malaysia had established a regulatory framework for sewerage and sanitation as early as 1990. In general, the services aspect has improved vastly and has left a significant impact on the economic feasibility. One of the key features of sewerage management in Malaysia was the scheduled desludging framework adopted in 1994 which was operationalised by the national concession company - Indah Water Konsortium (IWK).

In 2008, the scheduled desludging framework was revisited and changed based on liberalisation model by the regulator, Suruhanjaya Perkhidmatan Air Negara (SPAN). The desludging of septic tanks were still to be performed periodically but the services could be rendered by either IWK or by any other SPAN approved desludging contractors selected by the septic tank owner.

The seminar deliberates on the thoughts, considerations and actions that underlie processes of regulatory development specifically in faecal sludge management and desludging services.The seminar will largely focus on the eventual change in the desludging framework as well as the current status, funding dynamics of sewerage infrastructure and services in Malaysia and the benefits and challenges of the funding mechanism employed. This will be followed by deliberation on practical learnings from experiences of Malaysia which can be used by stakeholders in India in driving the sanitation agenda forward.

Punita Nook Naidu has completed her Bachelors and Masters in Chemical Engineering from University of Science, Malaysia in 1999 and 2001 respectively. In 2009, she completed her Masters in Business Administration from University of South Australia. She is engaged in both private and public sector for the past 20 years, out of which 18 years were dedicated to sewerage sector. Currently, she is an independent consultant at the national and international level. Prior to that, she had worked at National Water Services Commission, a federal regulatory agency, from 2008 to 2018. She was actively involved in various roles ranging from formation of policies and strategies, planning and implementation of action plans, industry restructuring activities, tariff setting and pricing mechanisms, drafting of regulations and technical specifications, development benchmarking mechanisms and re-engineering of business processes to increase effectiveness and efficiencies. She was attached to Indah Water Konsortium (IWK), a national sewerage concessionaire, from 2001 to 2008 in various capacities.

The seminar is open to all and will be followed by tea and snacks.

You are requested to RSVP at This email address is being protected from spambots. You need JavaScript enabled to view it.

CORP Seminar Series
This is the 19th in a series of the Community of Research and Practice (CORP) seminar hosted by the Scaling City Institution for India: Sanitation (SCI-FI: Sanitation) initiative with the support of Bill and Melinda Gates Foundation (BMGF). This seminar series seeks to provide a platform for discussing the experiences of the researchers and practitioners on urban sanitation.

Scaling City Institutions for India: Sanitation (SCI-FI): Sanitation is a research programme at the Centre for Policy Research (CPR) on inclusive and sustainable urban sanitation. In the programme, we seek to understand the reasons for poor sanitation, and to examine how these might be related to technology and service delivery models, institutions, governance and financial issues, and socio-economic dimensions. The programme seeks to support national, state and city authorities develop policies and programmes for intervention with the goal of increasing access to safe and sustainable sanitation in urban areas. The SCI-FI: Sanitation programme is funded by the BMGF.

You need to login to reply
Page selection:
Share this thread:
Copy URL
Recently active users. Who else has been active?
Time to create page: 0.348 seconds
Powered by Kunena Forum