04 Mar 2016 04:21 #17312 by Elisabeth
I am introducing today results from a grant that the Universidad Nacional de La Plata, Argentina, had received from the Bill & Melinda Gates Foundation. I am posting this on behalf of the lead researcher for this project, Maria Laura Alzua.

Whilst the research for the project was already carried out in Mali a little while ago (2011-2013), important publications only came out late last year, so I thought it's important to bring this to your attention, as it was a very comprehensive study which - amongst other things - also investigated impacts of CLTS on child health. 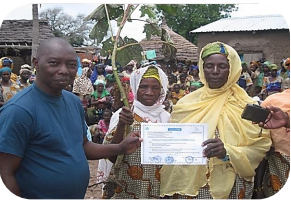 Source of image: project poster ( www.susana.org/_resources/documents/defa...01-16-1439735599.pdf )
* Some information about Maria: "I'm a professor at the Economics Department and a senior researcher at CEDLAS (Center for Distributional, Social and Labor Studies). My interest in sanitation arises from the development point of view."

Although CLTS has been implemented in over 50 countries, there is a lack of rigorous
and objective data on its impacts on sanitation and hygiene behavior, and on health outcomes such as diarrhea and child growth. The project evaluates the impact of a conducted CLTS campaign implemented by the government of Mali with the support of UNICEF. 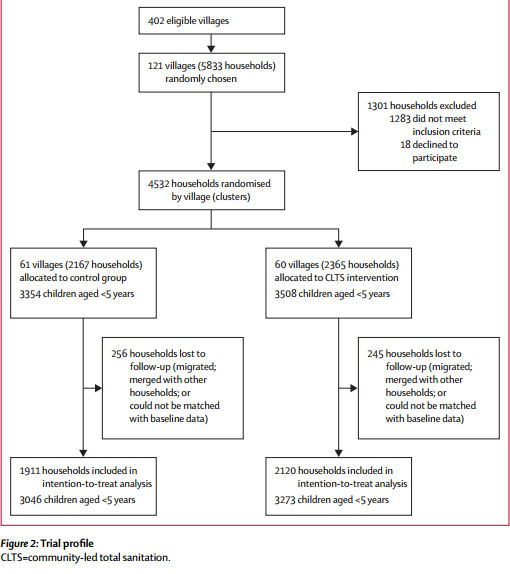 Time frame: Location: Koulikoro Region (Koulikoro was one of the regions affected by the unprecedented large-scale complex humanitarian crisis in Mali)

The program did not have a significant impact on self-reported diarrheal illness, thus the program may have impacted child growth and mortality through pathways other than preventing diarrhea, such as reducing the subclinical condition of environmental enteropathy via decreased exposure to environmental fecal contamination.

To improve the evidence of the effectiveness of Community Led Total Sanitation Programs on health and behavioral outcomes (the ultimate goal of CLTS is to achieve whole communities that are free of open defecation).

Stanford University, USA; Aix-Marseille University, France; University of the Andes, Colombia; Université Laval, Canada. The CLTS intervention itself was implemented by the Malian government with the support of UNICEF.

Description of the trial on Clinical Trials.gov, a service of the U.S. National Institutes of Health:
clinicaltrials.gov/ct2/show/NCT01900912

Documents in SuSanA library (includes a poster about the project from January 2015): www.susana.org/en/resources/library/details/2301

The CLTS campaign was highly successful in increasing access to private latrines, improving the quality of latrines, and reducing self-reported open defecation (see for example figure 3 below from final report). Access to a private latrine almost doubled among households in CLTS villages (coverage increased to 65% in CLTS villages compared to 35% in control villages).

Although the program led to dramatic improvements in sanitation access, quality of latrines, and improved hygiene behaviors (such as keeping soap and water in the latrine), villages did not reach universal access as intended by the program. Although certification was awarded prematurely in some villages universal access would most likely have been infeasible. The fact that follow-up data was collected a full year after village certifications indicate that the CLTS intervention can be sustainable, but longer-term studies would also shed light on how long improvements in sanitation access persist through time.
Dr. Elisabeth von Muench
Independent consultant located in Ulm, Germany
This email address is being protected from spambots. You need JavaScript enabled to view it.
Twitter: @EvMuench
Founder of WikiProject Sanitation: en.wikipedia.org/wiki/Wikipedia:WikiProject_Sanitation
My Wikipedia user profile: en.wikipedia.org/wiki/User:EMsmile

17 Mar 2016 15:05 #17463 by cecile
Hi,
Why is it mentioned in the report that it cannot be cited and the results cannot be distributed ? What a pity for a report which concludes about the positive impact of a CLTS program without subvention ! What are the reasons behind this ?
The report mentions that the CTLS program is conducted by the DNS in Mali with support of UNICEF. I would be interested in knowing more about the implementation scheme of the project. Was it a direct implementation or was it subcontracted to associations or NGOs ?

PS : by the way, I ended up finding this report through the "new" filtering process in SuSanA's library. I selected one topic of the working group, which led me to key reports in the topics and then for the publication whose content is discussed on the forum, there is a direct link. This is just brilliant !
Cécile Laborderie
MAKATI Environnement
You need to login to reply
Less

I am so glad you found our new filtering functions of the library, and the links between library and forum helpful. That's really nice to know.

About the report ( www.susana.org/en/resources/library/details/2300 ) it's true on the front page it says: DO NOT DISTRIBUTE OR CITE THE CONTENTS OF THIS REPORT.

However, I think that it now outdated because the report is from June 2015 but later they had this important publication:

I believe that contains all the results from the report and that's what people are meant to cite.

However, I will also double check with Maria, also about your other question regarding the implementation.

thanks for taking the time to read the report. As Elisabeth mentions, the report was an internal report for Unicef and the Foundation who funded the evaluation, you can check and quote the main results from the Lancet Global Health paper.

The implementation was in the hands of the Department of Sanitation of Koulikoro with the support of Unicef. Unicef participated in all the triggering and monitoring ceremonies. They hired local people in some areas, but the job was not sub-contracted in any way.

Personally, I do not see the results as a "pity", it shows very persuasively that a well implemented program can significantly reduce OD in very poor and rural areas. Of course, conclusions may not be the same in other parts of the world, where subsidies are needed. But it shows the importance of behavioral change in terms of adoption.

We are working on some "economics" papers (I'm an economist by training) looking at what is driving adoption.

Maria Laura Alzua
You need to login to reply
Less

What I meant by "pity" was not about the results, but on the contrary the fact that I could not quote the report to illustrate how a CLTS program without subsidies demonstrated good results one year after the end of implementation but then Elizabeth's reponse (and yours) made sense and I quoted the Lancet instead.

My questions about subcontracting was aimed at better understanding the role of the partners in implementing a CLTS program. In this case I understand the design and technical assistance of the program was done by UNICEF and the implementation was done by the Department of Sanitation in Koulikoro. This is interesting because institutional engagement enhances sustainability and is a sound basis for replication.

I will have more questions on the study soon but first I will need to go back to the Report.
Thanks !
Cécile Laborderie
MAKATI Environnement
You need to login to reply
Less

13 Apr 2016 14:18 #17699 by malzua
Cecile
I agree that partners play a big role in the success of the implementation. Unicef was very effective in working with the government. THe program was very well implemented and it showed some positive results in child stunting.

maria Laura
You need to login to reply
Less

The Lancet Global Health paper is very interesting to read, especially considering the current Thematic Discussion on Wash and nutrition on this forum. The conclusions are interesting in terms of possible positive effects of CLTS without subsidies first on WASH behaviour and second on the height and the weight of children.

In terms of methodology I can see that four Universities were involved in the study. What is so complicated in running this kind of study? What can be shared (and not shared) with the WASH (and health, and nutrition) communities? Questionnaires? What software did you use?
In the projects I worked in, we ran WASH KAP (*) surveys several times - questionnaires, excel sheets and access software - with small teams and smaller number of respondents and very small budgets. Does this mean we did not do a good job? How can we improve our statistical treatment and how can we integrate parameters such as HAZ and WAZ and other health and nutrition indicators?

Is there any chance the study you ran can be further replicated and scaled up? Is there a possibility that your University could provide training on this topic?

We decided to do a very sound impact evaluation of CLTS that required a big sample size, geographically representative, and measuring many outcomes. Also, we had external finance for the evaluation, separated from the implementing team. I'm an economist by training, but teamed up with sanitation specialists in order to train the enumerators who conducted the evaluation, We don't do this sort of training unless we are doing the evaluation ourselves. Which kind of training did you have in mind?

Maria Laura
You need to login to reply
Page selection:
Share this thread:
Copy URL
Recently active users. Who else has been active?
Time to create page: 10.453 seconds
Powered by Kunena Forum